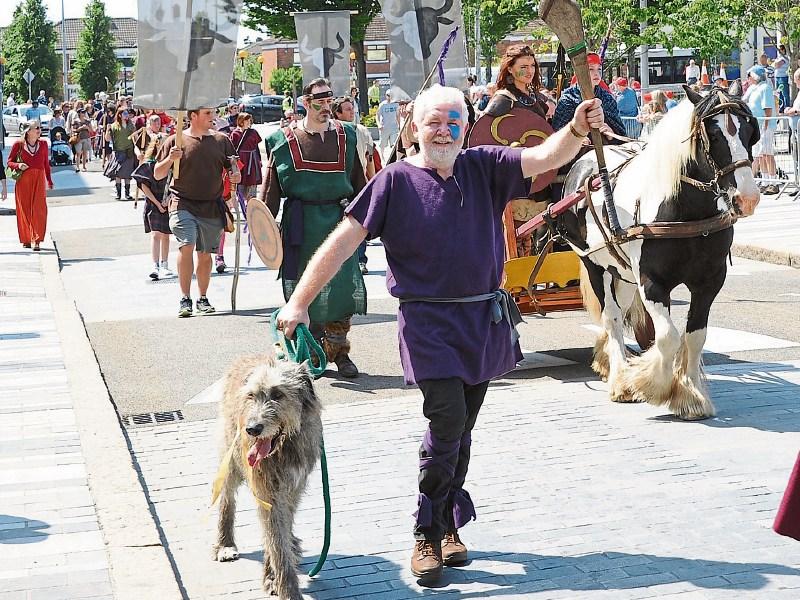 The 27th Infantry Battalion of the Irish Army are set to march 240KM from Roscommon to Louth in search of the Brown Bull of Cooley this Bank Holiday weekend.

Joining Queen Meabh’s Army are the 27th Infantry Battalion of the Irish Army who will be walking across the country to replicate the footsteps of the Legendary tale of An Táin Bó Cúailnge/The Brown Bull of Cooley.

The Táin March Festival is a family-friendly celebration, tracing the route of Queen Meabh and her army in their attempt to seize The Brown Bull of Cooley as told in Ireland’s greatest epic – An Táin Bó Cúailnge. Packed full of music, storytelling, performances and much more, this festival is the ideal way to soak in Irish culture and heritage with something for everyone to enjoy along the route this year.

“It is great to see the Táin March grow from strength to strength”, says Paul Gosling, Archaeologist and Senior Lecturer at GMIT Galway. “I’ve been involved for the past 6 years as a storyteller of Ireland’s legends along the way while it was only a Louth event and now last year it took a leap of faith to incorporate the full route of Queen Meabh’s army from Rathcroghan, Roscommon and finishing in Omeath in Louth. What a spectacular family event to teach adults and children along the way about the legends of Ireland”, he added.

This year’s celebrations kick off on Saturday May 28th with a gathering at Rathcroghan Visitor Centre and a meal will be enjoyed in Tulsk afterwards along with a few short readings from the Táin.

The following morning sees the marchers head out to Rathcroghan, with the official launch taking place on top of the mound where Marsháil na Tána, composed by Gerry O’Connor, renowned fiddle player, will be played publicly for the first time.

Queen Meabh will thereafter order the 27th Infantry Battalion of the Irish Army, headquartered at Aiken Barracks in Dundalk, to lead her own ancient army as they set off on their quest.

They will be led through Tulsk by the Raheen Pipe Band and will be greeted by local school-children before arriving at Leahy’s Pub for another gathering.

After stops at Ballinalee, Longford and Ballymanus, the march then descends into Kells on June 1st with the day finishing up in the Commons of Lloyd, where Meabh was said to have camped during her quest.

Further stops in Rathkenny, Ardee, Moore Hall and Knockbridge will follow before Meabh and her army arrives in Dundalk on June 4th, where the epic battle between Ferdia and Cú Chulainn commences at the Market Square.

The next day, the marchers will be joined by students from Dulargy National School and a barbecue will take place at the Lumpers Bar in Ballymakellett with the festival concluding on the shores of the beautiful Carlingford Lough in Omeath on June 6th.

If you or your family would like to take part along the way you can log onto www.tainmarch.ie