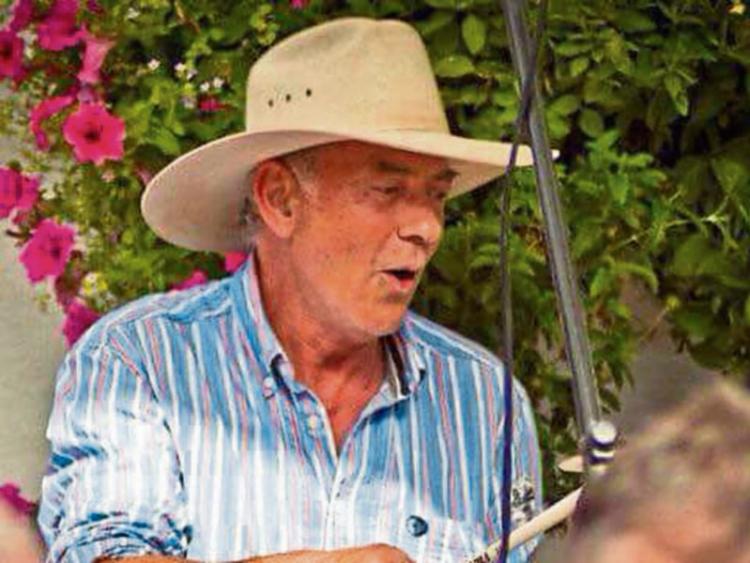 Dundalk sadly lost one of its most talented and beloved people on April 17th, with the passing of Gene Berrill.

Gene, a native of Wolfe Tone Terrace, who resided in Oaklawns in his latter years, is survived by his wife Marie, son Colin, daughters Roseann and Naomi Doyle and her husband Mark, daughter­-in­-law Rebekah, grandchildren Declan, Ella, Oisín and Mia, brothers and sisters­-in-­laws, nephews, nieces and his extended family.

Gene was a member of many bands from Co. Louth and throughout the country, including The Long Riders, The Merry Mac's, The Harbour Blues Band, The Smokey Mountain Ramblers, as well as many other musicians such as Ray Lynam, Freddie White and Errol Walsh.

He was also a key figure in the Showband era, playing in bands such as The Nevada Showband, The Toronto Showband, The Farmer's Sons and The Cotton Mill Boys, a band which also featured the late Des Wilson, that famously made an appearance on a 1976 episode of 'Opportunity Knocks'. Gene can be seen drumming with The Merry Mac's in the 1996 film 'Some Mother's Son', which starred Dame Helen Mirren.

The musical population of Co. Louth and the rest of Ireland went to a standstill at the news of Gene's untimely passing. Tributes from bands, musicians and music venues across the nation began to pour in.

Many artists shared their fond memories of Gene, stating how supportive he was to fellow musicians and how influential and iconic his drumming was. Gene was well known throughout the whole of Ireland, through touring. The New York country band The Nashville Attitude paid a tribute to Gene on their own Facebook page.

Gene had such huge knowledge, love and respect for the instrument. He was in charge of the drum­section in Conor Hughes' Music Shop in Blackrock, and later on, in The Sound Shop, Drogheda.

Gene opened his own drum shop 'Custom Irish Drums' in Stephenstown Pond, Knockbridge, where he and his son Colin crafted their own range of bespoke drum kits, as well as selling top of the range drums, cymbals, sticks, hardware and other musical instruments.

Drum clinics, hosted by 'Custom Irish Drums' were a poplar event in Stephenstown Pond, attended not only by drummers, but musicians in general.

A Civil­Ceremony was held on Wednesday 20th May in the Lisdoo Bar & Steakhouse, where Gene's fellow band­members in The Long Riders shared their memories of the drumming legend.

Paddy McEneaney spoke of the fun times that they all had on the road, and that Gene himself was the spark behind it all. Tubby Corrway and Séan McGeeney were joined by Paudie Breen for a soaring version of George Strait's 'The Cowboy Rides Away', a track previously recorded by The Long Riders, featuring Paudie on vocals, on their charity album in aid of North Louth Hospice. Seán and Tubby later performed a heartfelt rendition of 'Desperado' by Eagles.

Gene's cousin Desie Corbett reminisced about how, growing up, himself, Gene and the remainder of 'The New Beatles', as they called themselves, had built a raft out of oil-drums, in order to sail across to Liverpool to see 'The Fab Four' perform.

They very aptly christened the raft 'The Titanic' on the day of its maiden voyage, as the oil-drums began to float off leaving 'The New Beatles', all dressed in their Sunday Best, drenched.

Paul Bailey, a long time musical collaborator with Gene, starting their first band 'The Jaydees' aged just 16, he reminisced about the comical time Gene introduced him to Eric Bell, the man who would later play guitar in the original Thin Lizzy line­up, in a bar in Dublin.

After his beautiful send off, Gene left for his resting place, to a thunderous round of applause.

Later that night, a musical celebration of Gene's life was held in the function room of the Lisdoo. A massive crowd attended the celebration, showing just how popular and respected Gene was throughout the town. Local music legends took to the stage. The Long Riders kicked things off, followed by The Urge, The Harbour Blues band, and a host of other fabulous musicians including, Mickey McEneaney, Paul Bailey, Declan, Murphy, Brendan Boland, Melissa Hayes, Henry Mac, Fergie and Mícheál McElligott, Alan Markey, and Pete Johnson, to name but a few.

Some of Gene's longtime friends kindly shared their memories and tributes with Dundalk Democrat:

"Gene was like a brother to me. Thats what being in a band is like, you're more than just band-members. I think about Gene every single day, he's always on my mind.

"Goodbye to you, my trusted friend".

"Geno was my best friend for over 26 years and a fantastic drummer, who I will miss for a long time".

"Geno Berrill was my dearest long time friend and the best drummer I ever played with .and life will not be the same without him".

"Gene was my oldest friend for over fifty years. He played his music with undeniable passion, always a had a smile and time for everybody. I miss you more everyday"

"Geno was a warm, kind gentleman who was a joy to be around and always made you feel at ease, then you watched him wildly launch into 'The Resurrection Shuffle' with The Long Riders and it would make the hairs on your neck stand. Just a few aspects of the great friend we all miss dearly."

"I still cannot get my head around the fact that he has passed away. He was one of the best drummers I've ever had the privilege to play with. Geno was one of the most genuine and loving people you could ever be fortunate enough to have in your life. He always had a welcoming smile for everyone he happened to meet, whether it was a familiar friend or a stranger meeting him for the first time, they would always be greeted with one of Geno's warm, enchanting, mischievous and welcoming smiles. I really miss him terribly."

A tribute page, titled 'A Memorial to Geno Berrill' has been set­ up on Facebook. Anyone wishing to share their memories and tributes to Gene, are welcomed to do so on the page,

Although Gene has left us, his music still lives on today, his fabulous drumming can be heard on albums by The Long Riders, The Harbour Blues Band as well as his drumming on every track on 'The Rare Blend' album.