Lawless' hits the centenary in some style 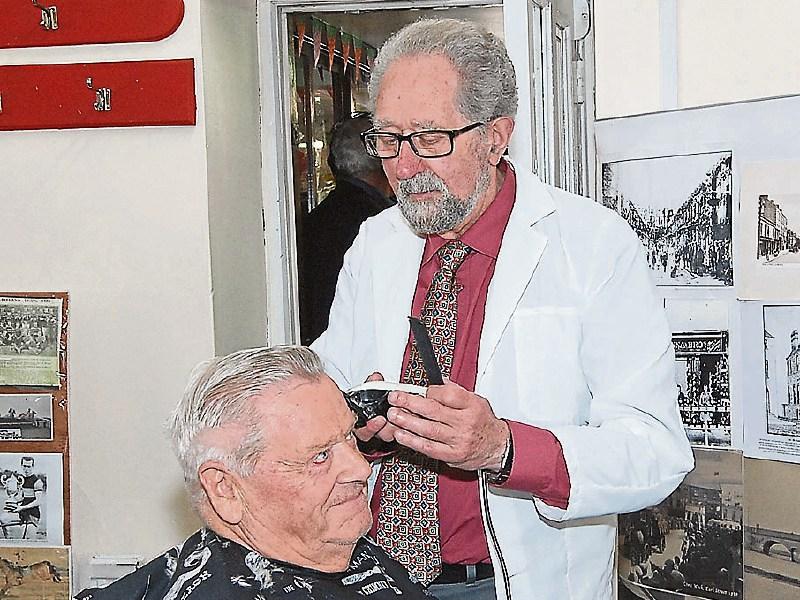 W. Lawless Barbershop & Candy Store, which first opened its doors in 1916, was packed to the gills last Friday, for the first day of their centenary celebrations.

The barbershop is known for walls donned with old photographs, newspaper cut-outs and memories from Dundalk throughout the past century, this feature was expanded with the addition of a photographic exhibition, detailing the history of the shop and the town, as well as Ireland in 1916 and Dundalk's connection to the events of The Easter Rising.

Beneath the three golden balloons, which formed the number '100', stood a beautiful, old-fashioned candy-cart, kindly crafted for the event by the talented craftsmen from Dundalk Men's Shed. Jack Lee kicked off musical celebrations, followed by The Men's Shed Choir, who sang some traditional Irish songs, accompanied by acoustic guitar and bodhrán, including 'Raglan Road', which had everyone singing along.

Next up were Cúchulainn Celtic Strings, who performed a lively, clap-along set of jigs and reels including 'The Foggy Dew'. They were later joined by some Irish Dancers.

The atmosphere throughout the building was electric, everybody was in great form.

There were even some Gaelgeoirs there, keeping with Nan and the late Pat Lawless' tradition of welcoming all Irish speakers into the shop to speak about any subject.

Joe Duffy and his technical team were broadcasting live for 'The Afternoon Show' on Dundalk FM.

Joe interviewed Billy Lawless, who informed listeners about the building’s history, while the interview was going on, the large crowd that had gathered in the building listened intently to Billy's fascinating stories and information.

Ramona Grabowska spoke to The Democrat about the celebrations.

“We would like to thank all the Lawless family and friends, staff and team for making this event a memorable one for Billy and Nan. We would also like to thank our neighbours on Park Street for their help and support with the event, to everyone who called with messages of support, well wishes and cards, your support was greatly appreciated, thank you so much.

“Thank you to Dundalk FM, Noreen Morgan Mc Manus, Cuchulainn Celtic Strings, Dundalk Mens Shed, Conor Quinn, Seamus Mc Guinness, Stew and Jack Lee you made the event so enjoyable as it is impossible to thank everyone we trust that this will be accepted as our thank you to you all from the bottom of our hearts”