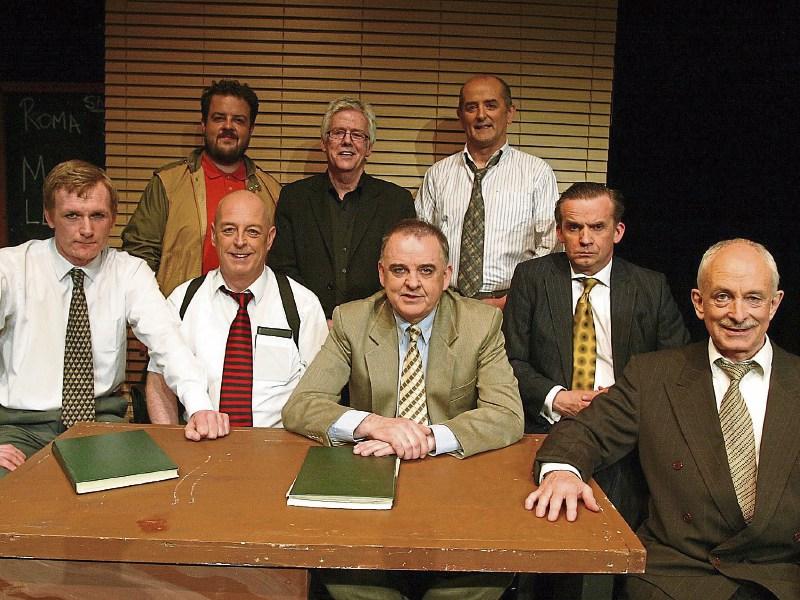 After winning the Abbey Award at the All-Ireland Drama Festival in Athlone, they will now stage the play at the Peacock next Thursday, Friday and Saturday. It is the first time a Dundalk drama group will perform at the national theatre and ranks as one of the greatest achievements in the long history of Dundalk theatre.

The adjudicator at the All-Ireland finals in Athlone adjudicator Padraic McIntyre said Dundalk Theatre Workshop “landed David Mamet’s play with the nasty punch it so needed”.

The play is about the colourful dog-eat-dog world of Chicago real estate agents and as Mr McIntyre said, in reference to our lost Celtic Tiger world, “Some would say we know them well. They moved to Ireland”.

And he pointed out that the colourful Chicago dialogue, the “venomous dialogue”, was “their vocabulary, whether we like it or not”.

He said the set design by Tony Rice and Bernard Dunne was cleverly achieved and praised the minimalist set of the Chinese restaurant and how it reflected the “perfectly seedy” nature that underlined “the shabbiness in these men’s lives”. And he said the low rent space of the office was “really well achieved”.

The lighting by Seamus Farrell was “beautiful and effective”.

He said Tim Ahern as Shelly Levene produced “a really, really fine performance” and captured the “shameless, weasel nature of the character so well”. Rhythm and pace was excellent and the accent was always strong.

Dave Moss played by Gerry O’Hara was “another fine performance” with the acting capturing the underlying rage of the character. The adjudicator in particular praised his “comic timing”.

Paul McGee as George Aaronow was another who handed the role extremely well, while Fergus Mullen delivered “a really, really fine characterisation” of Richard Roma.

“This actor understood and delivered the grand poetic monologues of the writer,” Mr McIntyre said, and Fergus Mullen was praised for capturing the “cock of the walk” mannerism of the character.

Paudie Breen as James Lingk was praised for his “fine work”, and Jimmy McEneaney provided “a lovely portrayal” of the detective Baylen.

He said director Matt Murphy knew the importance of the “quick fire exchanges” which he said were very well executed and also praised Matt’s ability to convey the “collective sound of the alpha males fighting to survive” in the second act.

The Abbey Theatre is also delighted to welcome the Dundalk Theatre Workshop.

As winners of the Abbey Theatre Award at the RTÉ All Ireland Drama Festival 2016, they will perform their production of Glengarry Glen Ross by David Mamet on the Peacock stage.

As Matt Murphy said: “in this play “we see human fears and insecurities, the banter that hides true feelings, the inability of people to fully communicate with one another.

“But there is light at the end of the tunnel. We are dealing with real people here.”