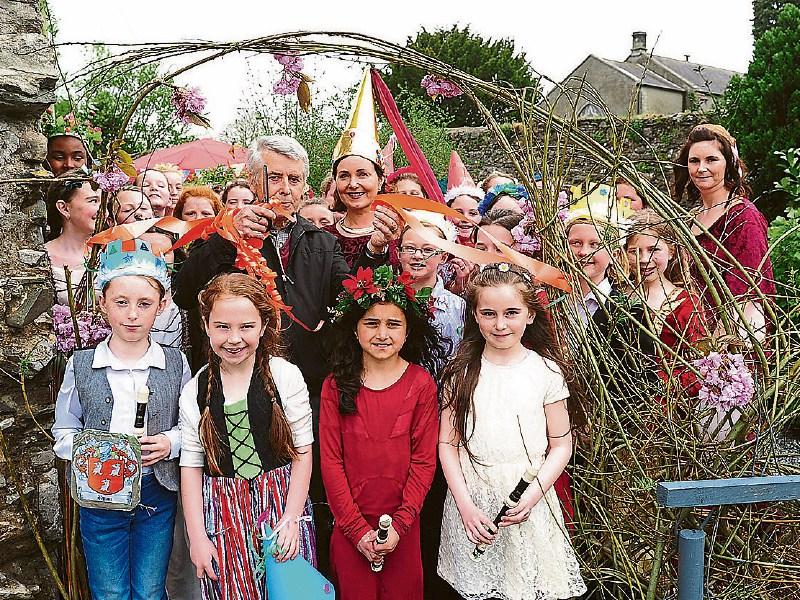 The pupils of Scoil Mhuire na Trócaire have transformed the historical site of Chantry College, Ardee as part of the “Eco Tribes Challenge” organised by Louth County Council.

The girls in Fourth Class, led by their teacher Mrs Rust, were given the challenge of developing a medieval garden in Ardee.

In partnership with Ardee Tidy Towns and guided by Pamela Whitaker of Groundswell.ie the girls worked tirelessly to research, plan and develop the garden for this competition.

Medieval gardens were functional and so the garden features a number of beds containing herbs for both medicinal and culinary use, vegetable beds, wildflower beds and medieval trees.

Last Wednesday the school organised a public event to launch the garden, and dressed in medieval costumes, they paraded through Ardee behind their eco-tribes banner “The Willow Tribe”.

The garden looked resplendent in the May sunshine with the pupils’ colourful bunting, a willow seat and archway, painted logo and a beautiful wooden sculpture.

The beds were all created from rustic logs which were very kindly provided by local tree surgeons Seamus and Patrick Kelly who provided invaluable help with the garden.

Chantry College was set up shortly before 1487 by Walter Verdon. The remains of the college at the site are smaller than the original college. The missing section would have contained common rooms and a kitchen. Chantry Colleges were common in Ireland in the middle ages and although similar buildings existed in Dundalk, Drogheda, Stabannon and Termonfeckin it is only in Ardee that any remains of the buildings survive.

So it is a wonderful achievement for the girls to create such awareness of this hidden, historical gem in Ardee.

The pupils then thanked all who helped them with their project:- school staff Gerard Kelledy and Brendan Kane for their expertise, their teachers Mrs Rust, Ms Lynch and Ms Haughian, their principal Mrs Sweeney, Bernie Balfe for her help with the music, Brendan Matthews of Ardee Tidy Towns and the CE workers, Finnan McCoy for the sound system and Seamus and Patrick Kelly for the tree trunks and logs used in the construction of the beds.

They also thanked all their special guests, judges, public representatives, local businesses and traders and of course all parents who were so helpful and who were there in great numbers to support them.

Everyone then enjoyed a medieval banquet provided by the parents and local baker John Caffrey.