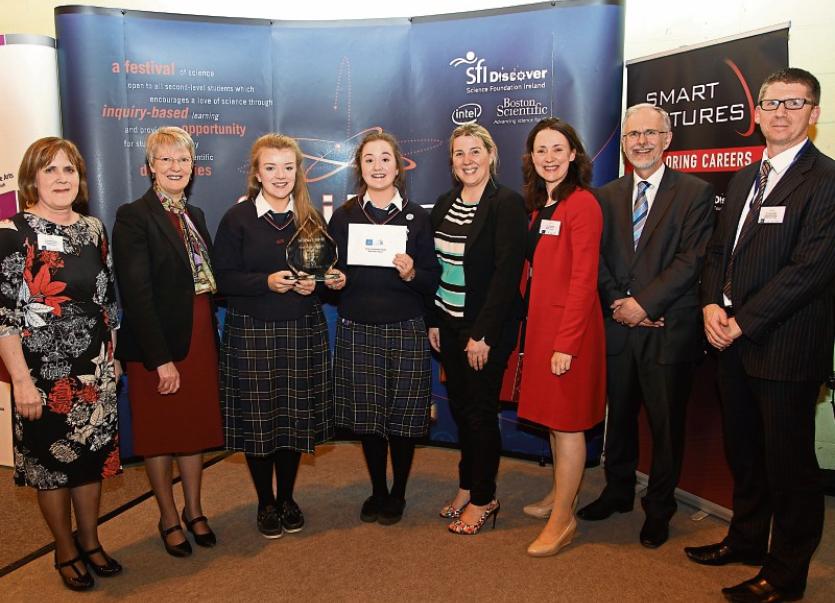 Students from St. Louis Secondary School, Monaghan were Awarded ‘Best Project’ in a Regional Science Competition at Dundalk IT which took place on the 4th May 2016.

Post-primary school students from schools all over Louth, Meath, Monaghan, Cavan and North Dublin took science to the next level with almost 130 projects exhibited at SciFest@DkIT 2016.

As one of the fifteen regional venues hosting a SciFest science fair, SciFest@DkIT saw over 300 students from schools all over the region exhibit almost 130 projects at Dundalk IT and put their knowledge of science to the test.

This was the largest event to date in DkIT with a large increase in the number of projects exhibited this year as compared to previous years.

Commenting on the SciFest@DkIT final Sheila Porter, SciFest CEO said: “2015 was a hugely successful year for SciFest with a record number of students taking part. In total 7,200 students exhibited their projects in local science fairs across the country.

“This year we intend to build on that success and have another record year. SciFest gives students an excellent opportunity to develop their interest in STEM and inquiry-based approaches to learning, while developing their creative and problem-solving skills and learning to work in a team”.

Of the almost 130 projects exhibited at SciFest@DkIT 2016, the top prize on the day went to Simone Clerkin and Alison McDonnell from St. Louis Secondary School, Monaghan for their project ‘The healthy alternatives to high calorific ingredients in food for young children.’. The aim of their research was to highlight the need for healthy alternatives to high calorific ingredients in an attempt to increase the nutrition intake and reduce obesity in young children.

During the event, a total of 16 prizes were awarded to the participants and DkIT President Ann Campbell awarded the prizes to the winners. Students attended lectures as part of the SFI Smart Futures programme which helps to promote career opportunities in the STEM area and were also entertained by the Science Gallery, Dublin in their exciting ‘Bite Size’ show.

“It’s important for DkIT to open its doors to our secondary schools for such events, and provide a platform to showcase the students’ discoveries. In addition to the national sponsors, we are grateful to our regional sponsor Glen Dimplex Group for joining with us to support and encourage these future scientists. DkIT offers a range of high quality, relevant STEM programmes delivered in a friendly, student-centred environment. Graduates of these programmes are equipped with the knowledge, skills and competence that will allow them to contribute to Ireland’s growing economic and technological success’.

SciFest is funded primarily by Science Foundation Ireland, Intel and Boston Scientific. The winners from each regional science fair go on to compete at a national final in November 2016.

For more information please go to the SciFest website: www.scifest.ie