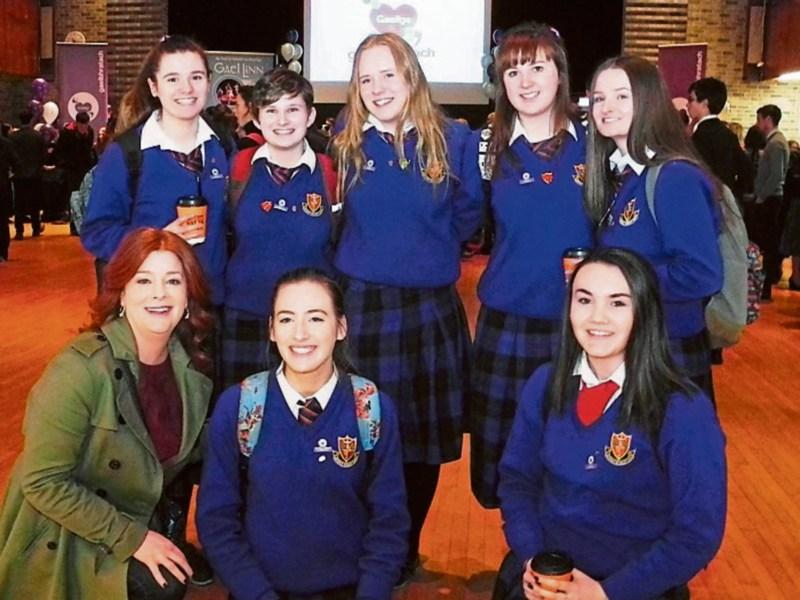 St Vincent's Secondary School Dundalk were honoured recently when they were awarded the prestigious Gaelbhratach Flag.

They were among 700 pupils, from both primary and secondary schools, who gathered at St Patrick’s College, Drumcondra, Dublin to attend the Gaelbhratach presentation for 2016.

The Gaelbhratach scheme, initiated in 2014 has gone from strength to strength. Nearly a hundred schools are now partaking in the scheme and this year’s event recognised the Irish language achievements of 60 schools. Seán Ó Coinn, Deputy CEO of Foras na Gaeilge and Antoine Ó Coileáin, CEO of Gael Linn also spoke to those in attendance with regard to the importance of young people in the promotion of Irish. Both see the scheme’s growth in recent years as a sign of hope for the language’s future.

Eoghan Mac Dermott from 2FM presented the event for the second year running and had the crowd dancing to the group Scannal who provided musical entertainment at today’s event.

The Irish Department in St Vincent's have worked tirelessly this year in their endeavours and have organised a wide-range of events to help promote the Irish Language and Culture within the school.

They had great success in the Féile Drámaíochta where they won the 1916 commemorative award for best 1916 drama at regional level and were nominated to represent the area at both Junior and Senior level in the Leinster Finals. They were joint winners at the Inter-Schools Céilí/Table Quiz which was held earlier this year in the Lisdoo and they also hosted the Conradh na Gaeilge roadshow.

They organised an action-packed trip to the Isle of Skye in Scotland for a Gaidhlig/Gaelic/Music collaboration. The cross-curricular venture saw 47 students travel to the Sabhal Mòr Ostaig which is a Scots Gaelic college where they took part in an exciting range of cultural events.

One of the highlights of the year was undoubtedly the sold-out concerts which were held in the Spirit Store featuring musical talents from across the school. Gaeilge24 challenged students to speak Irish for 24 hours and as always the Céilithe were energetic workouts for both senior and junior students. Teacher Susan Wallace spoke of her delight at the recognition this award brings to Gaeilge within the school and thanked all the staff and pupils involved for all their hard work and enthusiasm.