Past pupils come from all over for Marist opening 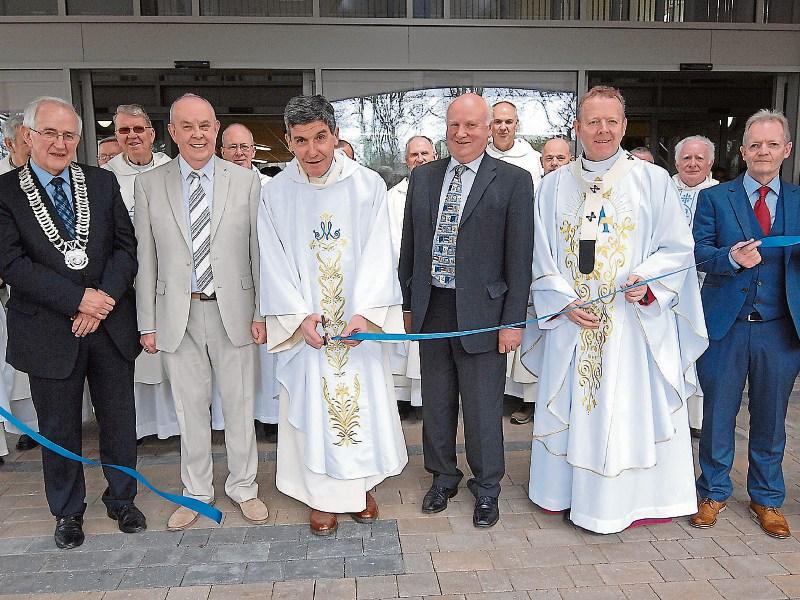 They came from Rome, and from Paris, and from all over Europe, for the official opening of the new St Mary’s College school building in Dundalk on Friday last.

Fr John Hannan Superior General of the Marist Fathers, and a former pupil, came from Rome and Fr Hubert Bonnet-Eymard, European Provincial who came from Paris.

Chair of Louth County Council, Cllr Peter Savage, Chair of Dundalk Municipal District Committee, Cllr Maria Doyle, many past pupils, and people representing much of the community, attended the Mass in the new school gym celebrated by Archbishop Eamon Martin, Primate of All-Ireland and Parish Priest of Dundalk.

In his blessing Archbishop Martin thanked the business community, the Government and the Department of Education, voluntary organisers, private donors, and the Marist Fathers, for their combined contribution towards the building project.

In his address, Fr John Hannan said that when the French Marist Fathers founded St Mary’s College in 1861 it was to provide a Catholic school. He was aware that now not everyone at the school is of a Catholic or Christian persuasion, but said it is incumbent on all of us to understand each other's heritage and the different meanings that are central to our lives.

And that message - the fundamental Christian message of love and tolerance - was reflected in the Gospel which he described as “a wonderful summary of the Christian vision”.

In was of course Matthew’s poetic account of the Sermon on the Mount.

Many of us who went to St Mary’s discovered poetry and its power, and the magic of words, thanks to the kindly educators, the Marist Fathers, and this, of course, is the most poetic of Gospel passages.

Fr Hannan said he first came to St Mary’s in 1953, when the then new wing was blessed by Cardinal D’Alton.

He left in 1961 but returned for the college centenary in that year. And now he was back for this historic opening of a state-of-the-art building which he described as a great achievement.

The school was originally a house, Church Hill House, opposite the Green Church, and it was from here that a procession, led by the Marist Marian icon, made its way to the new building.

Archbishop Martin, chatted on the way to pupils who formed a guard of honour, and local people and later said that he had a sense of the significance of the short journey.

It was indeed. Another historic moment in the history of St Mary’s College Dundalk.

The site for the school building was provided by the Marist Fathers. The eco-friendly building is expected to reduce energy costs and the classrooms and teaching spaces include specialised rooms for the teaching of a broad curriculum.

“This new building is an exciting renewal of St Mary’s College, a part of Dundalk for over 150 years,” Mr Con McGinley, Principal, St Mary’s College said. “We will continue to provide excellence in education for all our students.”