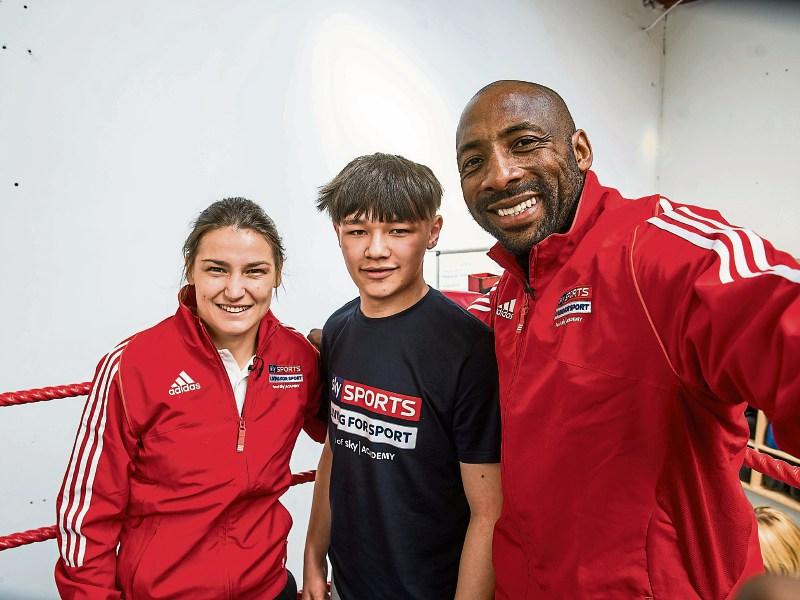 The Dundalk pupil thought he was filming a boxing masterclass with Sky Sports Boxing’s Johnny Nelson and was shocked when Katie surprised him with the Award. Footage of the surprise was broadcast on Sky Sports News today.

Patrick, 15, is one of thousands of secondary school pupils participating in Sky Sports Living for Sport projects throughout the UK and Ireland. The free Sky Academy initiative, delivered in partnership with the Youth Sport Trust, uses sport to help young people build practical skills and self-confidence. Over one third of secondary schools across Ireland (250) have already benefitted from Sky Sports Living for Sport. The annual awards recognises and rewards the success of students and teachers who have participated in the programme.

Patrick was nominated to take part in Sky Sports Living for Sport because he was struggling with some aspects of school life. During the project Patrick went on a life-changing journey with his attendance improving and becoming fully engaged in class. His confidence has grown and he now has goals and ambition, believing he can change and achieve his desires. He is now part of the Student Council, an achievement nobody would have thought possible a short time ago.

Dundalk PE teacher Brendan O’Malley has also been named Sky Sports Living for Sport Teacher of the Year for Republic of Ireland. The O’Fiaich College teacher was recognised, alongside teachers from England, Wales, Northern Ireland and Scotland, for his involvement in the free Sky Academy initiative.

Brendan, who has been running projects at O’Fiaich College for the past three years, uses Sky Sports Living for Sport as an extension to the existing PE programme, recognising its potential to act a as motivational tool for students who strive to be involved. The project targeted students with behavioural problems who lacked motivation and self-belief, and had a positive impact on their attitudes, behaviour and attendance.

“This award really affirms what we are doing at O’Fiaich College. I can see the positive difference this initiative has made to our school and I hope that this can inspire other schools and teachers to get involved."

For further information on Sky Sports Living for Sport award winners or to sign up visit www.skysports.com/livingforsport.

The event was aired by Sky Sports News HQ on Wednesday 4 May.