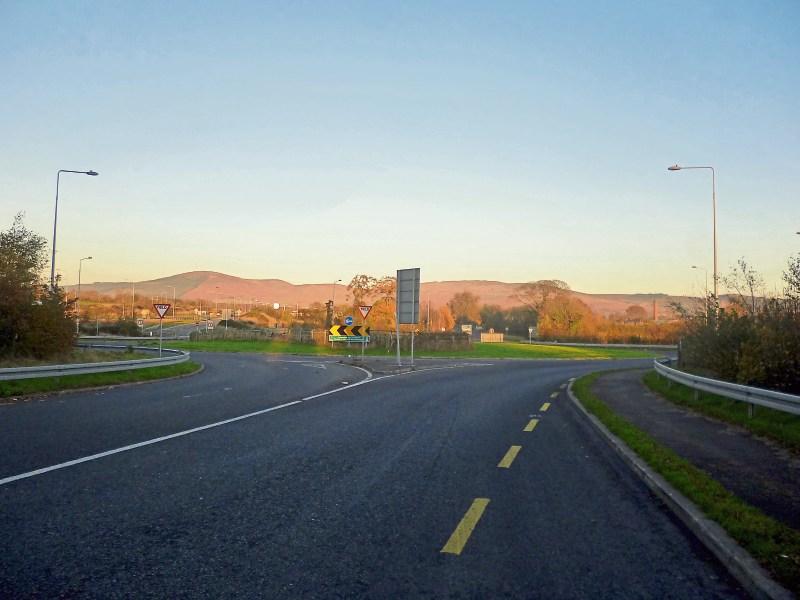 There is a strong local tradition that Edward Bruce, brother of Robert Bruce, was crowned King of all Ireland somewhere in the Dundalk area seven hundred years ago this month, on May 1, 1316. Whether or not this true is very much open to debate and the whole idea has been debunked recently by Dundalk man Professor Sean Duffy of Trinity College who claims that, if Edward Bruce was ever proclaimed a king must have happened shortly after he landed with an invasion force near Carrickfergus in May of the previous year 1315.

The tradition is that he was crowned at a hill called Knocknameelan and held court in a castle in the Castletown area for over a year, up until the time of his death at the Battle of Faughart in October 1318.

The Old Dundalk Society put so much belief in the story that, when they were erecting a number of historical blue plaques around the town over a decade ago, they put one on the side of a house at the junction of Park Street, Earl Street and Francis Street (which can be still seen), stating that he was crowned king here in 1816. This seems to have been based on the evidence that there once was an old fortified house on the site known as Moritimer's Castle which had originally been called the King's Castle. Now this, clearly cannot be true as this fortification was not built until more than two hundred years after Bruce's sack of the town in late June of 1315. Bruce certainly did not hang around the area either, as he was too busy campaigning around Ireland for the next three years, a fact which is well documented.

Whatever the truth of the old tradition, it seems that somebody still believes it as, when I was out at Faughart Graveyard recently, I noticed that some person or person had put flowers on Edward Bruce's supposed grave beside the ruined church. An irony is that the flowers were plastic, which I doubt would have really pleased Bruce. There was also a sprig of heather, which is more in keeping with the Scottish origins of the Earl of Carrick, the title that Edward Bruce really held. There was also a bowl of pink coloured stones but one can only guess what they had to do with the old Scottish warrior.

It was probably very doubtful that the remains of Edward Bruce are actually buried here. The records that exist seem to indicate that, after the Battle of Faughart, his body cut up and displayed in several different places, including Dundalk, and his head sent to the English King, Edward II, as proof that he was really dead. It would be a mistake, however, to completely dismiss the old traditions as, often, they are the only records we had of events so long ago!

Another old local tradition is that, the night before the Battle of Faughart, Edward's army was encamped at McArdle's Field at Lower Faughart. This name relates to the McArdle family who lived in Faughart House for over 100 years. Before that, the field and house belonged to the Macneil family, of whom the great railway engineer Sir John Macneil was the most distinguished member.

Sir John was born at the now named Mount Oliver House at Ballymascanlon but he probably also lived later at Faughart House and had his own railway halt nearby at Mountpleasent. Sir John contributed greatly to the prosperity of Dundalk and its surroundings because of the employment and industry the railway system brought to the area in the nineteenth century.

Many were hoping that one of the new roundabouts that were constructed by the Louth Council Council in the area in recent years, with the coming of the M1 motorway, would have been named after John Macneil, but, in spite of petitions to this effects, it seem that none of the members of that august body were sufficiently interested in the suggestion!

Interestingly, one of these roundabouts was named after a ghost of a man who was related to Sir John, Torquill Macneil, at 'The Major's Hollow'. The reasons given for the Major's hauntings of the area are not very laudable! Strangely enough this roundabout has been the scene of a number of fatal road traffic accidents, even before it was made into a roundabout! Maybe this was the revenge of the Major,who died in exile in Canada, for all the bad things that were said about him! Or was it the ghost of his horse that objected to modern traffic?

All is not lost, however, for the memory of the achievements of Sir John Macneil, which include the construction of the Navvy Bank in the 1840s. The Dundalk Railway Heritage Society are hoping to erect a plaque to his memory at Jocelyn Street, where Sir John lived for a time when his other great works, the Boyne and Tullymore the railway viaducts were being constructed in the 1850s.