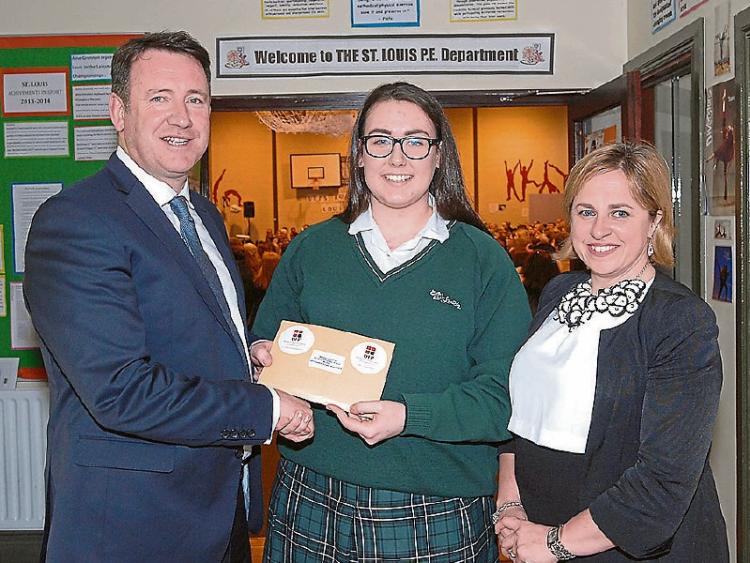 The highlight of the evening was the presentation of The Dún Lughaidh Ethos award to Caoimhe Watters by Mary O’ Connor, SSL. This award is for the student who most embodies the qualities the school aims to instil in all students; respect, truth, responsibility, happiness and excellence. Principal Lorraine Quigley praised Caoimhe for her outstanding contribution to school life. In her acceptance speech Caoimhe acknowledged the many other sixth years that had been long-listed for the award and the two other nominees on the night, Shauna Armstrong and Aisling Mc Enteggart.

Recognition was given for Best Leaving Cert 2015 to Maria Dawe, and Best Junior Cert 2015 to Niamh Burns. A gaggle of last year’s sixth years also received awards in recognition of their outstanding Leaving Cert results and others for gaining Entrance Scholarships.

The Sports Department was not neglected with many awards being given to Basketball, Soccer, Gaelic and Athletic stars. Principal Lorraine Quigley commended the tireless work undertaken by those staff who trained the many teams in the school. Sportsperson of the Year went jointly to Eimear Byrne and Aisling Mc Enteggart. U-19 Basketball Player of the Year Jewell Rosagaran was delighted to receive her award. She also trains the younger teams in the school and was one of four Basketball players recognised on the night. Volleyball is a new sport in the school this year. Aoife Verling was recognised for her leadership in this category. U14 Gaelic Football winner Mia Rogers was “shocked but thrilled” to have been chosen as winner in her category.

Music Awards were presented to Bláithín Hughes for Orchestra, and to Rachel Byrne for Choir. The musical entertainment on the evening was then provided by these two groups under the batons of Regina Killoran and Elaine Byrne. The Art Award went to Éabha Short, and was presented by her teacher Áine Mc Eneaney.

Academic Excellence Awards were presented. These are given to the students who achieve the highest grades in their respective Year Groups. Hannah Pheifer, first year, Fionnghuala Drumgoole, second year, and Ciara Matthews, third year who all played with the orchestra on the evening were delighted with their awards. Aisling Mc Enteggart who won the Academic Excellence Award in sixth year alongside Insa Shahid, also jointly won Sportsperson of the Year with current Head Girl Eimear Byrne. “Extra-curricular activities tend to enhance our students’ performance in the classroom, and it is great to see those who embrace our ethos of educating the whole child being recognised tonight,” said Michelle Dolan, Deputy Principal.

Endeavour awards were presented to students in every class group with a winner being announced in each year. Third Year Student of the Year Darija Martinkute was delighted to have won. “I’m so proud of myself. I can’t believe I won!”

Lorraine Quigley, Principal, was particularly proud this year to present the Sr Clare Memorial Award to a former classmate of her own, Niamh Shaw. Niamh graciously accepted the prize and went on to speak with passion and conviction about never giving up on your dreams and striving always to make them a reality. She shared, to the delight of both parents and students alike, some of her diary entries from her days in school, and said she was looking forward to chatting to the students in the school the next day about STEM subjects and the role women can play in Science and Engineering. We look forward to the day when our former Louis girl gets to travel to space – her particular dream, which she is currently chasing!

Des O’ Loughlin provided the audio visual equipment to give the event a Hollywood touch. Students and parents alike were impressed by the wonderful photographic presentation compiled as always by Elaine Mc Grath, where every girl was given the limelight for her special moment and attention to detail was second to none.