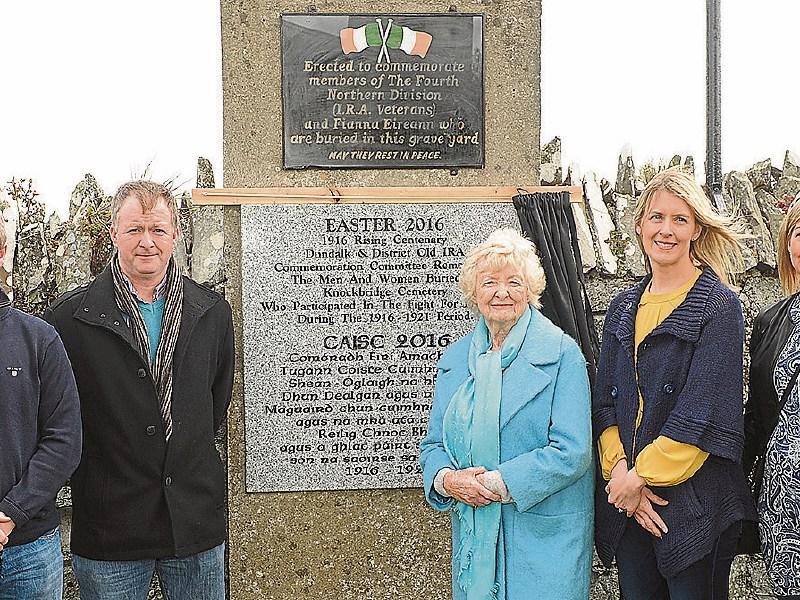 Church, Knockbridge on Sunday 24 April. After Mass there was a parade to the Republican Plot with a large crowd in attendance for the official unveiling of a new plaque.

A wreath was then laid followed by a decade of the Rosary in Irish. There was then an oration followed by a reading of Francis Ledwidge lament for Thomas MacDonagh.

After the Proclamation was read the last post was played and the flags were lowered. The ceremony concluded with the National Anthem.

Mrs Mary McCann, daughter of Patrick Hughes, commander of the Louth Volunteers in 1916 and later Officer in Command with the IRA during the War of Independence, unveiled the new plaque.

This is an annual ceremony and Mass held in Knockbridge and this year’s event took place after the Easter Rising centenary commemorations in Dundalk.

“We decided some time ago that we would erect a new plaque at the cemetery,” said Fianna Fail councillor Conor Keelan.

“We asked Mrs McCann if she would unveil the plaque and she kindly agreed. We thought it was fitting given that her father is buried there.”

When the Rising broke out in April 1916 there were 200 hundred volunteers in Louth.

The execution of the rebels shocked people and by July 1916 Sinn Fein support had grown in Louth.

The volunteers were re-organised. In April 1917 three volunteer companies were formed in Dundalk.

The Rising was condemned in the local press, in the local churches, and by the local politicians. The hostile reaction must be placed in the context of the terrible losses being suffered in the war in Europe. By the end of May 1916 over 300 Louthmen had been killed, probably over 1,000 wounded.