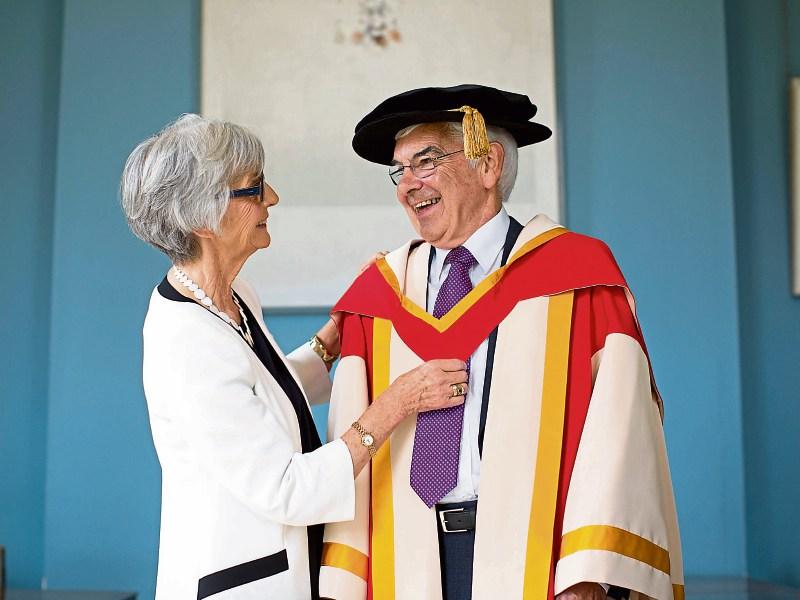 This is how Peter Malone welcomed graduates to their conferring ceremonies throughout his five-year term as chancellor of the University of Limerick.

This advice could not have been given by anyone more fitting than Peter Malone who has been presented with an honary degree at Limerick University.

Peter has had a very successful career in both the private and public sectors.

A native of Dundalk, Peter Malone graduated from Shannon College of Hotel Management with first-class honours and was one of three graduates to win a scholarship to the United States. He joined Jurys Hotel Group in 1974 and worked his way up to becoming the group’s managing director in 1989, a role he fulfilled with remarkable success for eleven years.

For Peter Malone, following the dream meant turning Jury’s Hotel Group into one of Ireland’s most successful hotel brands.

When he took over as managing director, the group had three hotels. By the time he retired, it had 35.

During his time at the helm, he oversaw a period of amazing expansion, including the launch of the Jurys Inn brand and the successful merger of the Jurys and Doyle Hotel Groups. Following the merger, Peter remained on as a non-executive director of Jurys Doyle Hotel Group until the company was taken off the stock exchange.

In 1989, Peter Malone was one of fourteen up-and-coming business men and women from the island of Ireland to be awarded an Eisenhower fellowship. Many years later, these people were honoured by Senator George Mitchell for the part they played in the peace process through their businesses.

Peter served as chairman of Hibernian Group plc, now Aviva, from 1999 to 2007 and as chairman of the National Roads Authority from 2002 to 2012. One of his first tasks with the NRA was to apply business principles to the manner in which the board conducted its business. He sought out the newly appointed ministers for transport and finance and managed to extract from them a five-year budget (or ‘envelop’) for the NRA.

This was the first time the government had ever made this type of financial commitment to the Authority.

Under his chairmanship, the NRA delivered some of the most historic changes to Ireland’s roads since the foundation of the state, including 1,000 kilometres of motorway, a high-quality dual carriageway system and reinvestment in the entire national primary and secondary roads network.

In addition, over one-third of Ireland’s national roads were transformed, which led to Peter becoming known as the country’s chief ‘journey-shortner’. So if UL graduates want to take the full thrust of Peter Malone’s advice to them, they should find the most direct route to their dreams and not waste too much time on the twists and turns of the journey.

In the twists and turns of his own life, Peter Malone found time to chair a number of public and private enterprises, including the CBRE Gunne Property Group and the Business Tourism Forum.

He was a member of the first Minimum Wage Review Group and the Review Body on Higher Remuneration in the Public Sector and served as director of the Plastic Bag Levy Commission.

He chaired the inaugural Dundalk Business Forum, which led to many companies, including PayPal, setting up in Dundalk and creating over 1,000 jobs.

He served as president of the Irish Hotels Federation and was a member of the Irish Advisory Group of Lloyds Bank. He is currently a board member of CIE Tours International, BDL Ireland Hotels and the Coeliac Society of Ireland.

UL was very fortunate to have Peter Malone as its chancellor from January 2008 to December 2012. Peter drew on his extensive experience in the public and private sectors to guide UL’s continued growth as a pioneering and progressive force in Irish education.

He carried out the role with distinction and oversaw a myriad of major developments, such as the Irish World Academic Building, the Graduate Entry Medical School Building and residences, the Tierney Building, the President’s Residence, the Sports Pavilion and the ‘Field of Dreams’ all-weather sports pitches.

In his time as chancellor, Peter never missed a single graduation ceremony or a Governing Authority meeting.

In fact, such was his pride in the UL campus that he initiated a process whereby GA meetings were held in different venues across the campus in an effort to familiarise external members with the wonderful facilities on offer.

From his fellow governors’ point of view, however, their chairperson’s motto of having a dream did not equate to having a day-dream during meetings: Peter was well known for keeping his colleagues on their toes by asking them for their opinions on various issues if he had not heard from them in a while.

Peter Malone was an outstanding UL chancellor. He greatly appreciated the hard work of the University’s staff and celebrated with pride the many achievements of its students.

He continues to be a loyal friend to UL, and we welcome this opportunity to show him how very much we appreciate his wonderful service to the University.