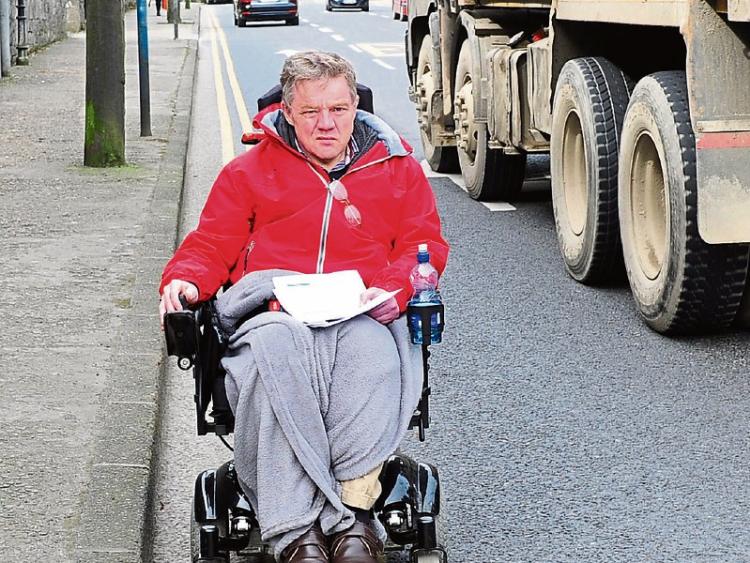 Dundalk Municipal District councillors decided to spend €48,000 of their municipal district budget allocationon of €60,000 improving access to footpaths and roads in the district for the disabled.

The work has been carried out in Dundalk town, Knockbridge, Carlingford, Blackrock, and Omeath.

Independent Cllr Maeve Yore has been lobbying for accessibility upgrade of this kind for the past 18 months.

Council engineers drew up a list of works to be carried out and at this month’s municipal district meeting Cllr Yore was told this work has been completed.

Twenty-one improvements were carried out in Dundalk town centre but Cllr Yore and John Morgan from the Point Road Dundalk, who is a wheelchair user, have discovered that 13 of these 21 improvements are well below standard.

Last week I went with them round the town to see for myself, and I have to say you would be hard pressed to see where the money went.

In many cases bits of concrete have been laid down between footpaths and roads in what is supposed to be properly gradients.

This is something we walk by every day of the week, but if you are a wheelchair user, who has had a spinal or head injury, the shock and vibration that this causes, is not only uncomfortable, it is also damaging.

The question is who signed off on these works because you don’t have to be an engineer to see that they are clearly not up to standard, to say the very least.

In some cases the tactile paving that has been installed is wrong. This also caused discomfort and possible damage to wheelchair users.

In some cases no tactile paving has been installed at all.

“I’ve been using a chair since 2012,” John Morgan told me. “Before that I would not have realised the difficulties people face.

“There have been improvements in the town since then but much of the work is just not up to standard.

Cllr Yore is a member of that group and is clearly disappointed that tow-thirds of the projects on the list devised by the council engineers do not come up to standard.

John Morgan points out that Cavan County Council spent seven years bringing Cavan town disable access up to standard. Engineers, planners, the county manager, sat down with disabled people and got it right.