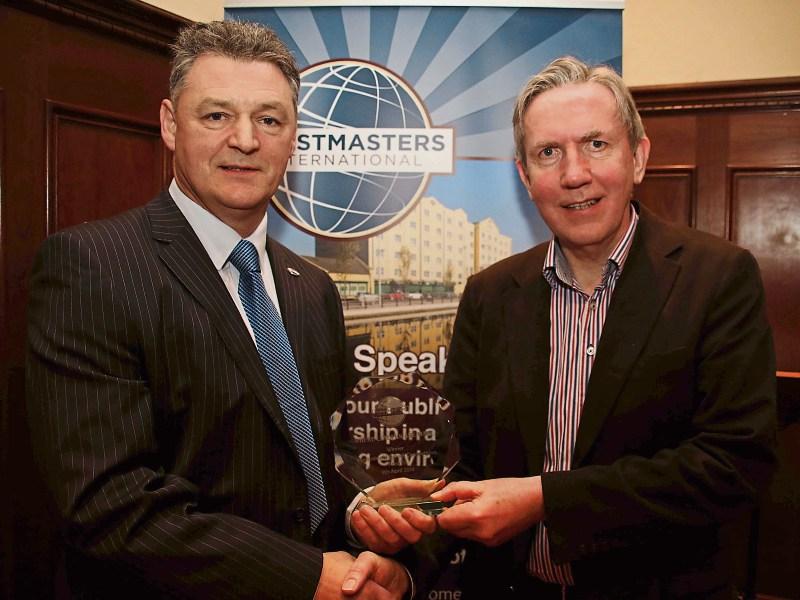 Vinny McCoy is in the national finals of the toastmasters International public speaking finals. They were held in the Regent Hotel Dublin last Saturday. There were eight finalists from all over the country and Vinny represented Area 19 which stretches from Drogheda to Belfast and includes Dundalk.

The Ardee man won the Drogheda Toastmasters club competition in March and then went on to defeat finalists from Dundalk Lurgan and Belfast to win the area finals.

Vinney won the national finals in 2013 and went on to compete in the Ireland and UK finals in at Torquay in England.

“I joined the Toastmasters club in Drogheda 10 years ago,” said Vinny. “I was leaving the Army at the time and had decided to start up my own security business.

“That year i won The Security Institute Trainer of the Year and to develop my presentation and speaking skills I decided to join Toastmasters.

“Toastmasters was above and beyond what I expected. It taught me that it is the person you become that matters. I went to Toastmasters to better myself, but I found it’s not about that, it’s about the people you meet.

“When you overcome your demons it's liberating.”

Vinny was in the Irish Army for 23 years. An NCO he served in the Middle East 46th Battalion and the 77th Battalion.

“I loved the army,” he said. But in the end I had done all I wanted to do and had a vision or a dream, if you like, to run my own security company.”

Through hard work and determination the dream came through.

His company is called Meridian Security and is based at the Ardee Business Park. Hale Street Ardee.He runs the company along with sons Shane and Barry.

But the Toastmasters bug never left Vinny. He is still competitive, still winning awards, but he is also putting a lot back into it.

Toastmasters started as a series of speaking clubs organized by Ralph C. Smedley during his time working for the YMCA in the United States.

Smedley saw a need for the men in the community to learn how to speak, conduct meetings, plan programs and work on committees, and he wanted to help them.

He named the group the Toastmasters Club; "toastmaster" was a popular term that referred to a person who gave toasts at banquets and other occasions.

The first unofficial Toastmasters meeting was held in 1905. Just like Toastmasters meetings today, the participants took turns leading and speaking at each meeting. Smedley and the older, more experienced men evaluated short speeches, while the younger men were invited to join in the evaluations.

This might make the early years sound misogynistic, but up until 1970, when the new feminist movement emerged, and Germaine Greer published the Female Eunuch, women weren’t supposed to have a voice at all.

Dundalk Toastmasters Club meetings, because of extenuating circumstances, has temporarily moved to the Nuremore Hotel in Carrick.

The Toastmasters programme helps men and women to practice their public speaking skills and develop their leadership qualities.

Their claim is that no matter who you are, if you wish to tackle your fear of speaking, you've definitely come to the right place at Toastmasters. You'll make friends, and in time your self esteem and self-confidence will soar.

The club meets on the first and third Monday of each month between September and May. No meetings are held on Bank Holiday Mondays.

Those meetings take place on the Tuesday of the same week instead.

People arrive at 7.45pm and meetings start at 8pm.

Members also have a programme on Dundalk 97.7 FM radio.