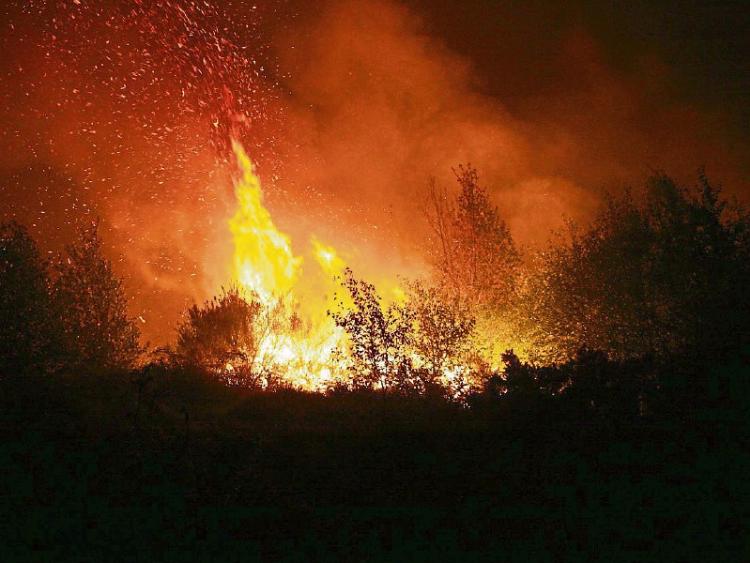 It was a busy weekend for Dundalk fire crews with a firefighter being injured following a stone attack in Cox's Demesne and gorse fire along the border to contend with.

Louth County Council have not ruled out the possibility that a fire unit was purposefully lured to a fire at 'The Clump' in order for teenagers to attack it with stones.

A spokesperson for Louth County Fire service told the Democrat that the incident occured at approximately 9pm on Sunday evening.

“Near Beechmount Drive there is a hill known locally as 'The Clump'. There was smoke descending from the hillto Oakland Park.

“They were carrying out an assessment there at that scene and they saw a youth running towards them, who then started throwing stones.

“They withdrew to the appliance. And ss they were getting back into the fire engine one of the firefighters was hit by stones.

“One in the helmet and one in the shoulder.

“The Gardaí were then called and an ambulance was called to the station to assess him and he was taken to hospital for an assessmen,t but he was fine.

“He had some bruising having been hit by the stones.”

The incident was described as not being uncommon, but what marked this incident out was that stones were thrown directly at the firefighters.

“The likelihood is that they (the youths) were socilising up there and set the fire and didn't want to be interrupted.”

Units were also called to gorse fires on Sunday night over the border in Northern Ireland too, but were stood down after the Northern Irish fire crew had taken the fires in South Armagh in the Forkill area under control.

It is believed that these gorse fires were the act of arson, and a phenomenon which could hit the Cooley Mountains in the coming weeks and months.

The Ring of Gullion AONB Officer said: “This fire has destroyed important habitats, left wildlife with no homes or a food source and the damage caused, risks the economical income coming into the area. Slieve Gullion Mountain has attracted tourism from across the world. Visitors want to walk the mountain for its beauty and the unspoilt environment – this is now under risk due to this fire”.

Contrary to the belief that wildfires are sparked by hot, dry weather, most of them occur in the spring. Winter frost leaves undergrowth too dry, meaning the fires can start easily and spread quickly, causing widespread damage throughout the countryside, as is the case with this fire.

At times the damage is irreparable. According to fire service figures, between 2012 and 2014, there were 5,002 incidents classed as wildfires across Northern Ireland. 4,584 of these fires were deemed to have been started deliberately.

Whether started accidentally or deliberately wildfires are extremely dangerous and can spread rapidly.