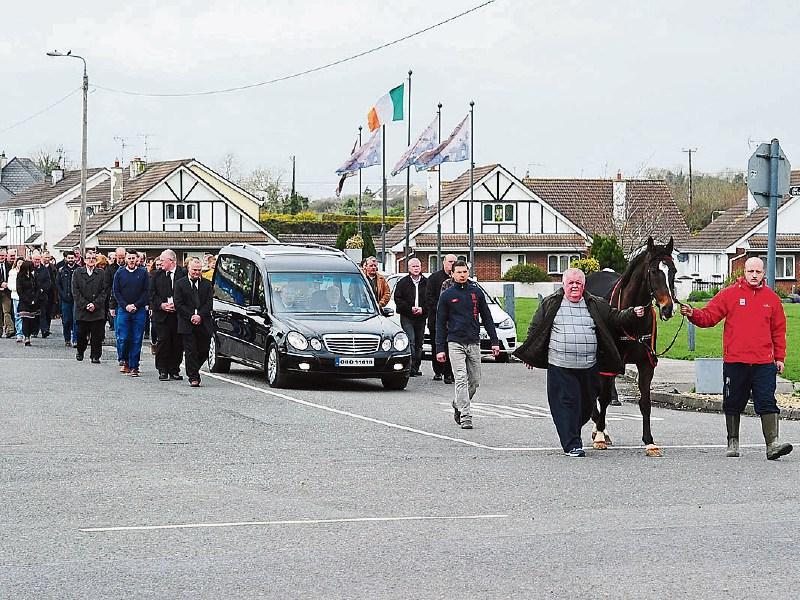 Brother John is a lovely title to have had in the community,” Fr Pat McEnroe Parish Priest, Darver-Dromiskin said at the funeral Mass last week of John McArdle, Little Road, Dromiskin.

He remarked how John - affectionately known as Brother John - had been working as usual just a few days before he passed away with his colleagues in Fás: Alan, Conor, David, and Supervisor Pat.

Barney O’Hare of Bar One Bookmakers, familiar to racegoers throughout the country, was a good friend of Brother John McArdle. Barney and son Michael are very successful in the horse racing world with their stables at Greenmount Castlebellingham, and as a tribute to John they brought one of their race horses, Montana Slim, to lead the funeral cortege from St Peter’s Church to the village cemetery. It was a beautiful and dignified tribute to John’s wonderful work and fundraising. John took part in many charity fundraisers over the years for Our Lady of Lourdes Hospital, the Louth hospital, and the tidy towns.

He had his beard shaved a few times, his legs waxed, and only a few years ago was in hot pursuit of Gerry Kinahan on his bicycle. As one fundraiser - who wishes to remain anonymous - so eloquently put it:

“These were fun events and John, with many others, put the fun element into it. His size 12 boots came with a health and safety warning. On two occasions, the great Dromiskin-born actor and comedian, Patrick McDonnell, came on board as match commentator, as all these games were filmed. The banter at the showing of the videos was top class thanks to people like John. On behalf of John’s fellow fundraisers we say thanks and sleep well Brother John.”