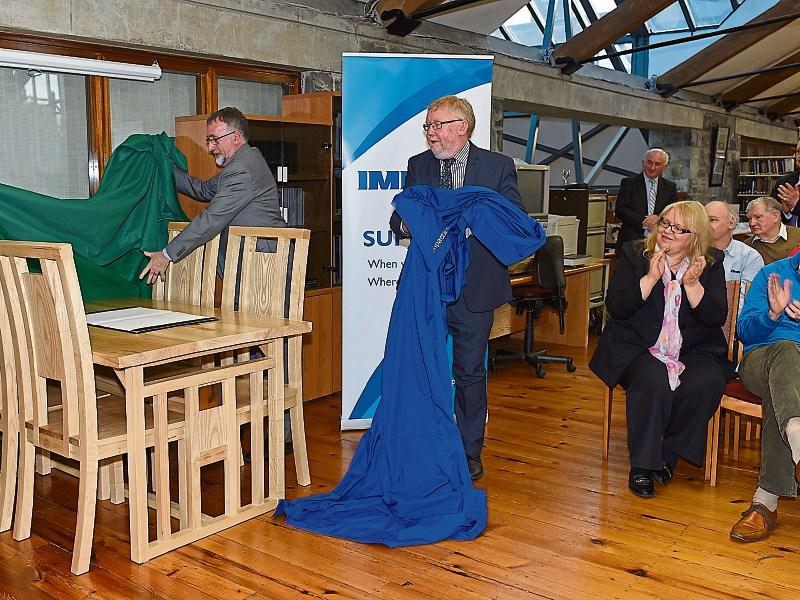 A workspace in Dundalk Library was officially dedicated to the memory of the public servant, trade unionist and historian.

Harold was a former general secretary of the Local Government and Public Services Union (LGPSU), a forerunner of IMPACT, and also served as president of the Irish Congress of Trade Unions (ICTU).

Speaking at the event, IMPACT general secretary Shay Cody said choosing to dedicate a workspace at the library in Harold’s memory was very appropriate; “Harold was a dedicated public servant and a passionate historian. The library service opens its doors to everyone in the community and invites everyone to share in the wealth of knowledge it contains.

“As a trade unionist, Harold was a brilliant advocate for public services and stood strongly for well-funded public services available to all. So it seems entirely appropriate that we remember him here and invite future visitors to the library to reflect on Harold’s positive legacy,” he said.

Born in Dublin in 1924, Harold was one of 10 children and grew up in Kildare. During the Emergency, he joined the Defence Forces, was commissioned as an officer and served as a Lieutenant with the Cavalry Corps.

Returning to civilian life in 1946, he was employed by Bord na Móna. He next joined the staff of Kildare County Council and later became a Health Inspector in Waterford, transferring in that capacity to Louth County Council where he was based in Dundalk.

Early in his working life he joined what was then the Irish Local Government Officials Union, moving up through the ranks as Shop Steward, Executive Council member and finally, in 1964, General Secretary.

He was first elected to the ICTU Executive in 1968 and having been elected Vice-President of ICTU in 1977, he acted as a mediator in the ill-fated Ferenka affair. Following the closure of the Limerick-based steel cord manufacturing plant, with the loss of 1,400 jobs, he described the management’s personnel policy as “very poor", adding “They regarded their workers as they regarded their machines.”

In 1978, as ICTU President, he described the situation whereby workers paid almost 80 per cent of total income tax as “grossly inequitable”. In March 1979 he said it was a situation the “PAYE classes” would no longer tolerate.

Massive nationwide demonstrations, supported by ICTU, took place with a quarter of a million workers taking part in one series, with 150,000 marching in Dublin.

Following his appointment in 1983 to the National Planning Board, he was succeeded as general secretary of the LGPSU by Phil Flynn.

In the mid-1980s, as chairman and acting director-general of the Institute for Industrial Research and Standards, he steered the Institute through a period of staff changes and public scrutiny from the Dáil Committee on Public Expenditure.

He later made his mark as a local historian, publishing or contributing to several books dealing with the borderlands of southeast Ulster. In addition he wrote numerous articles for local historical journals.

His M Litt thesis was The Trevors of Rostrevor: a British colonial family in 17th century Ireland (Trinity College, Dublin, 1985), while his doctoral thesis was Landownership Changes in the County of Louth in the Seventeenth Century.

His publications include History of Local Government in the County of Louth and John Bellew: a seventeenth-century man of many parts (both 2000).

A former chairman of the Irish Health Services Development Corporation, he also served on the National Prices Commission and was a member of the Telecom Éireann board.