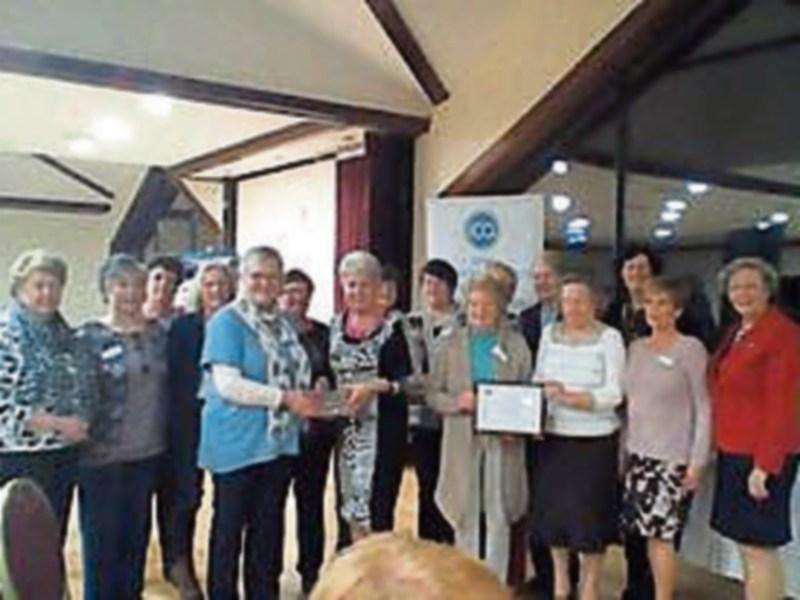 At the Federation AGM of the Irish Country Women's Association last week Blackrock Guild were announced as the overall winners of the Guild of the Year for Louth and were awarded the President's trophy.

This magnificent Cut Glass Rose Bowl, donated by Past President Breda O'Hanrahan, was presented to Guild President, Brenda Leary, by National President Marie O'Toole who was visiting for the night.

Blackrock were clear winners with 790 points, Drogheda came second with 590 and Louth village, last year's winners, were third with 540. Points are awarded according to a number of criteria, overall increase in membership, holding of open nights, attendance at Federation meetings, entry into Federation competitions and gaining 1st or 2nd place in these competitions.

Blackrock increased it's membership by 6 ladies this year, held 2 open nights - a summer and Christmas floral demonstration, and participated well at meetings and competitions. One of our members, Adrienne Boyle won second place in both the Aldi Federation Brown bread competition and in the Easter Simnel cake.

Blackrock also won the Nancy Darcy table quiz and the team made up of Assumpta Grey, Catherine White and Corry O'Dalaigh will represent the Federation at the National Final in An Grianan on Saturday 2nd April.

The guild celebrated the win by sharing a delicious specially iced cake after it's normal meeting, which this week was a talk and demonstation on the use of essential oils. Full credit must be given to all the members who support the meetings both in Blackrock and at Federation level.

Blackrock ICA meets on a Wednesday evening from 8 -10pm in the Community Centre in Sandy Lane. Our membership is now 39 so there is always a great buzz when we meet. Our programme includes craft work, speakers and demonstrations. A number of us will be attending a Basket making work shop with Ronan Russel of Newgrange Willow at the end of April. We also have a day trip planned to Castle Coole in Enniskillen in June. May is our recruitment month so why not come along to see what goes on? We shall be doing group work of the traditional crafts – crochet, knitting, cross stitch, lace and card making – with experienced members sharing their knowledge.