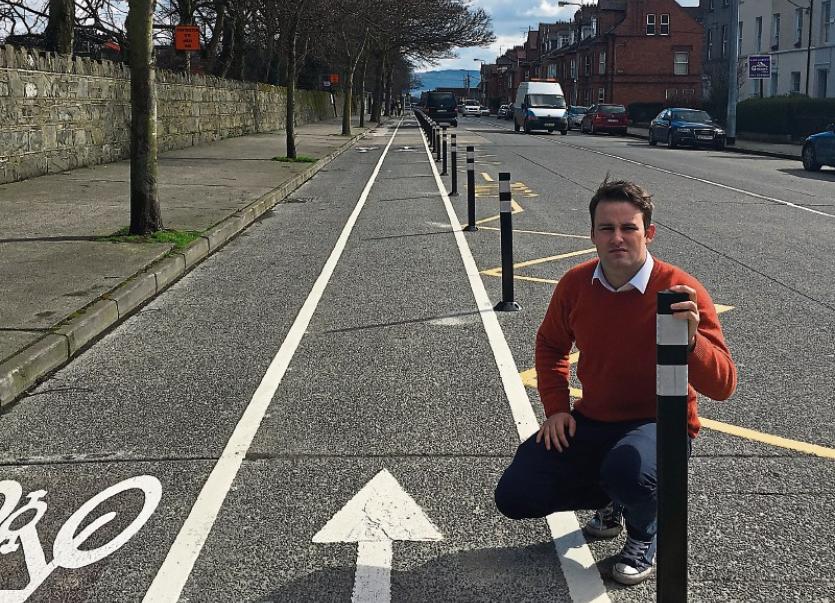 Cllr McGahon said “the last great street of Dundalk has finally been butchered”.

“We haven't learned anything from 2012, he said, as he hit out at the recently installed bicycle lane.

He called on Louth County Council to remove the ugly bollards, similar to the ones erected in Chapel Street.

“It is as clear as the light of day that we have not learned from the mistakes of the past in relation to cycle lanes,” Cllr McGahon said.

“The last great street of Dundalk town has finally been butchered, like Stapleton place and Seatown Place, thanks to the introduction of a cycle lane that leads to nowhere.

“Not only have residents lost over thirty car parking spaces, they are now greeted by fifty black bollards lining one side of the historic street. The fact that the cycle lane stops abruptly at the bottom of the road with a cycle lane ENDs sign defies all reasonable logic. Why on earth did planning officials allow a cycle lane to be constructed that starts nowhere and ends nowhere?

“Three years ago, I and local residents launched a petition and lodged objections to the introduction of a cycle lane and other aspects of the school building, however we were ultimately defeated when it went to An Bord Pleanala.

“Therefore, we can’t remove the cycle lane, but we can hopefully have it redesigned. Instead of having thirty bollards on the street, we should have a simple kerb, which provides the same protection for cyclists as bollards. By introducing this kerb, I believe we can still maintain a number of car parking spaces on that side of the road.

“Someone needs to take responsibility for this, whether it’s the council, or the school. Someone needs to sit down with residents and local councillors and come to a compromise that appeases everyone,” Cllr McGahon said.

Cllr Maeve Yore said the council was making a mess of the town of Dundalk by constructing cycle lanes that were not safe for cyclists or motorists.

“There is no logical thinking to the cycle lanes in Dundalk,” she said.

Cllr Mark Dearey - a champion of the overall cycle lane objective - was also critical of the St Mary's Road situation.

“The cycle lane doesn't go anywhere and it won't be used,” he said. And he made it quite clear that unless the various cycle lanes around town are linked up, parents will not allow their children to use them.

He said the cycle lanes on Chapel Street need constant maintenance - presumably because vehicles are knocking into the bollards and therefore the street is too narrow and unsafe for a cycle lane to be there in the first place.

“The way this was done means we haven't learned from experience,” Cllr dearey said.

Cllr Edel Corrigan hit the nail on the end when she said the real problem lies in the question: who is responsible for the design - if there is one - of cycle lanes in Dundalk, and what way are the cycle lanes being rolled out.

“We're creating more harm and greater risk to people by stopping them in the middle of nowhere,” she said. “It's crazy that a cycle lane designed to service a school would just stop with nowhere for the cyclists to go.”

The chair of Dundalk Municipal District, Cllr Maria Doyle, has said she will call a special meeting on the controversy if it's required.