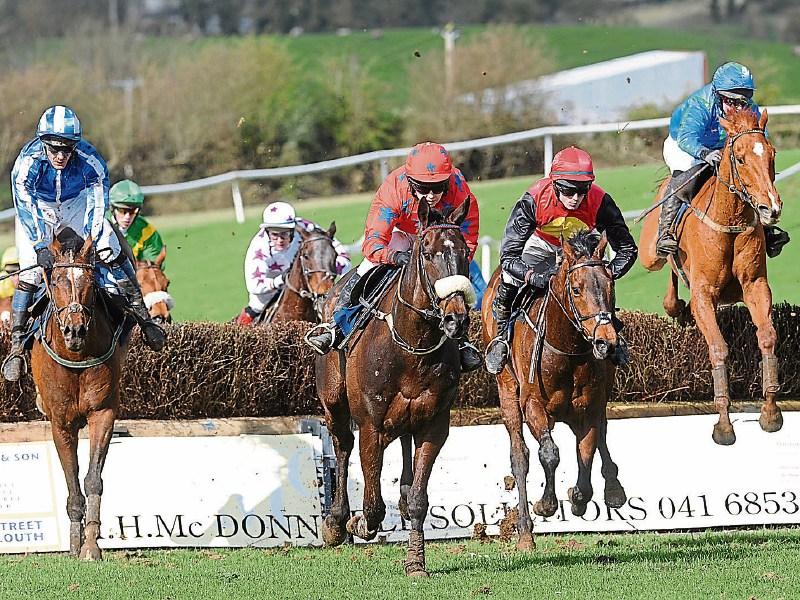 “Where Cranly led me to get rich quick, hunting his winners among the mudsplashed brakes, amid the bawls of bookies on their pitches and reek of the canteen, over the motley slush. Even money Fair Rebel: ten to one the field. Dicers and thimbleriggers we hurried by after the hoofs, the vying caps and jackets and past the meatfaced woman, a butcher's dame, nuzzling thirstily her clove of orange.”

That’s how James Joyce describes a day at the races in Ulysses, in 1904, and for years things hadn’t changed much.

A Youtube British Pathé film of the Louth Hunt Point-to-Point in 1921 shows bookmakers shouting the odds, a dicer and thimbler spinning a wheel and collecting money as he plays three-cards tricks on a table, racegoers walking about on the grass and studying the form before a race, ladies in fox furs, gentleman in bowler hats, soft hats, all kinds of hats, all kinds of people, and motors, and clerics with gloves and binoculars, and the crowds gathered round the jumps waiting for the skillful, and not so skillful, riders to arrive, lots of people, for we always liked our racing here in Louth.

On Sunday next 10 April the Louth Hunt Point-to-Point will be held at Bellurgan Park, a change of venue.

For the past 40 years it has been run at Rathneeskin near Tallanstown, the original home home of the Filgates of Louth.

The dicers and thimblers have been replaced by refreshments, a bar tent, a kids corner with bouncing castle (depending on the weather).

And of course, all the bookies will be there.

The point-to-point organising committee starts to meet in December every year to plan the event.

There are 12 people on the committee and their job is to organise officers, stewards, get sponsors, and the whole event is run in conjunction with the Turf Club, the regulatory body for horseracing in Ireland.

It's’ a one-day event. There are six races.

The Turf Club limits each race to 20 runners.

There are five fences on the course, each is jumped three times.

Tom Lanigan is chairman of the Louth Hunt Point-to-Point. Tom and the committee are to be commended for the painstaking work they put into organising this annual event.

The Louth Hunt will be 200 years old next year. It was founded in 1717 and operated from the lands of the Filgates of Lisreeny at Tallanstown.

They have about 60 hunts in kennels at Lishreny and the hunt covers Louth, Meath, Cavan and Monaghan.

Point-to-point is of course for hunting horses and amateur riders.

Here in Ireland it is open to professional trainers and many of the horses compete in these events before entering national hunt races.

Our point-to-point meetings serve as a nursery for future young stars.

A horse that wins its debut point-to-point in Ireland will often sell for a lot of money.

Louth Hunt Point-to-Point can often be the starting point for a four-year-old’s jumping career.

The entries come from the country’s top trainers, names like Jim Draper, and other household names.

About 120 horses will be entered for races on Sunday.

It promises to be a great day.

Not to be missed.

So put it in your diary: Sunday next 10 April.