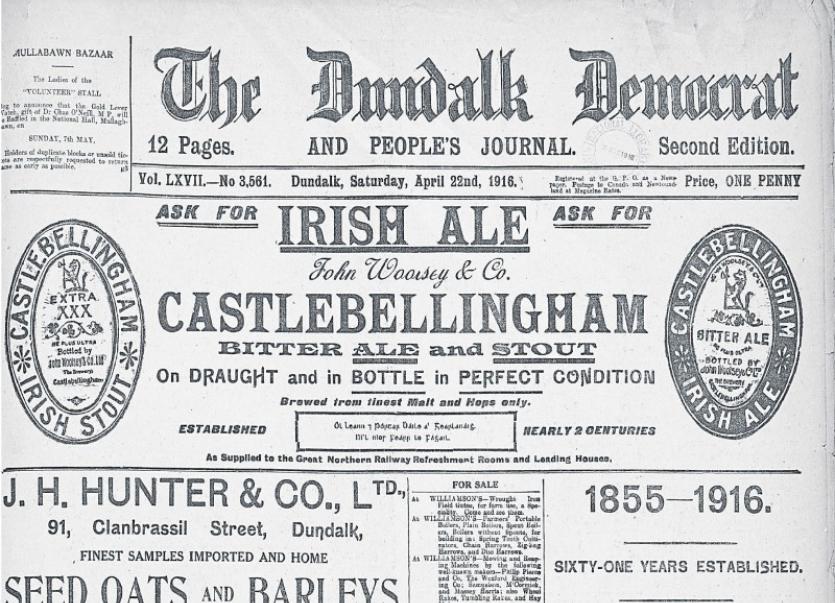 Last week's account by Frank Necy of his part in the 1916 Rising, which was published in the supplement to the Dundalk Democrat, bears out most of what he told me, at a later date, of his involvement. Readers will note that this was an article written by him on the occasion of the fiftieth anniversary of the Rising but was near enough to be fairly accurate. Easter Sunday that year fell on April 10, when most of the ceremonies commemorating the Golden Jubilee were held, but this article must have been published about a month later when Frank retired as Editor.

Another thing about this statement was that it was not one given to the Military Bureau of History but a simple account which was written specially for the newspaper. Not that the statements given to the Military Bureau, some of which have been on display at the County Louth Archives during the past month, would have been any more accurate. These statements would only have been made sometime between 1947 and 1957 and a lot of them, unlike Frank Necy's, would have not been written down by the persons making them but dictated to an official of the Bureau.

What does come through in the account is that Frank was a very honest and honourable man who was not claiming any particular credit or glory for his part in the events of 1916. The story was not even published under his name but was sub-titled 'Prisoner No. ---' which, presumably, was the number he was allotted when he has taken to Knutsford Jail.

It is not clear from it whether or not he was present when Police Constable Charles McGee was shot in Castlebellingham but I believe that he was not! I recall that he told me that his march had ended under a bridge near Slane 'with the rain “pouring” down'. The word he used about the rain was not 'pouring' but something more earthy. I had understood that he had returned to Dundalk directly, where he was arrested by the R.I.C. some days later.

He did explain that the orders to his company were that they should proceed to a war internment camp near Tara where German prisoners of war were held and attempt to release them, with the aid of Volunteers from Meath. He expressed puzzlement as to how this should be achieved as, 'I was only armed with a .22 and never met up with the Meathmen'.

At the time I had thought that the '.22' was a small sporting rifle, which were common enough to be held by the gun-sport fraternity in those days and did not even require a licence. It seems, from the statement, that I was mistaken and he was armed with some sort of a small hand-gun.

The other statements, published in the Democrat supplement last week, by Dan Tuite and Tom Hamill, which were made to the Military Tribunal, were also of great interest to me and, perhaps, raised more questions. The one by Tom Hamill concerning his refusal to join the I.R.B., was of particular significance as it borne out what I had written last week about Frank Necy's refusal to join that body after he was released from Frongoch Detention Camp and his subsequent 'punishment' for refusing to do so!

I noticed also that Tom Hamill stated that he had joined the Gaelic League 'shortly after its organisation in Dundalk in 1898.' I know that Frank Necy had also been an active member of the Gaelic League, (or Connradh na Gaedhilge as it was then known,) and that many of its members went on to join the National Volunteers before the outbreak of the Great War in 1914. Frank mentioned to me that the great change came in the summer of 1915 when a National Convention was held at the Athletic Grounds in Dundalk. Apparently there was a split between the 'hawks and the doves' at that Convention when Sean MacEntee (later President 1945-58) was elected President of the Connradh in place of Douglas Hyde (The first President under the 1938 Constitution). Frank to me hinted that the election of MacEntee on the occasion was something engineered by a militant minority; which indirectly led to the Rising at the following Easter.