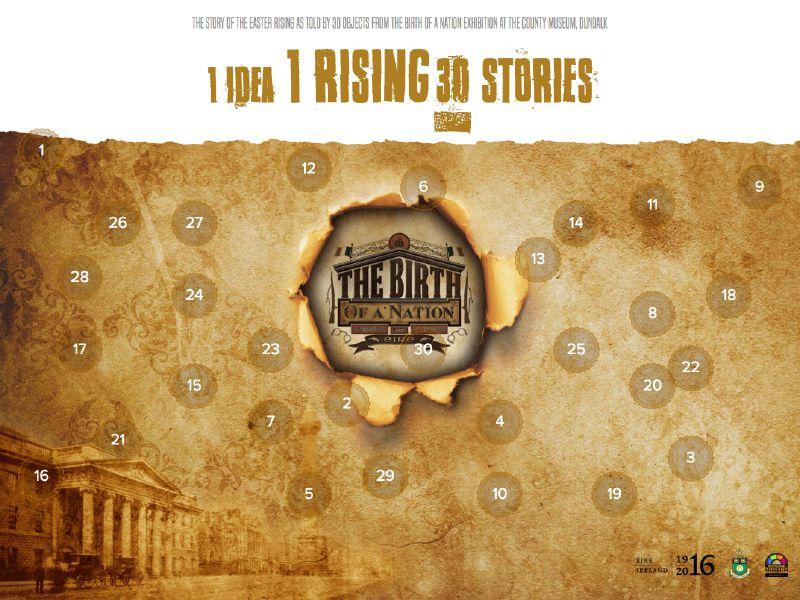 County Museum Dundalk is inviting students and anyone with an interest in Irish history to take a different look at the Easter Rising, through its interactive countdown resource, now available on www.1916countdown.ie. The website features numbered flaps, which, when clicked, reveal an image and story of significance to the evolution of Irish nationhood.

The items featured in the pictures can be viewed in the museum’s award-winning Birth of a Nation exhibition, which covers the time period 1641 to 1916. Items include handwritten documents by 1916 leaders James Connolly, Patrick Pearse and Roger Casement, and prison letters sent by some of those incarcerated after the 1916 Rising to their mothers. Robert Emmet’s death mask and even Oliver Cromwell’s shaving mirror are also included in the countdown, which is timed to coincide with the actual anniversary of the Easter Rising – 24th April. The images will be revealed day by day, and only the numbers corresponding to the days that have already passed in April can be opened, building a sense of anticipation.

Commenting, County Museum Dundalk curator, Brian Walsh said: “We are very excited to launch our 1916 countdown as it’s a different way to remember these momentous historical events. It also gives us a great opportunity to mark the actual centenary of the 1916 Rising, which started on 24th April 1916, and to bring the Birth of a Nation exhibition to a wider audience. This was made possible thanks to the financial support we received from the Louth Centenary Committee.

“The site is an excellent teaching resource, as it’s a novel and engaging way of bringing the Rising, and events leading up to it, to life for students and history buffs alike. We would encourage teachers, especially those teaching Junior Certificate students, to bring this website into the classroom as a fun way of learning about Ireland’s past. We also welcome all students, teachers and anyone with an interest in Irish history to visit the Birth of a Nation exhibition at the County Museum Dundalk to see the physical items featured.”

The website has been developed in conjunction with Drogheda-based company, MOR Solutions. Creative Director, Jonathan Callan said: “It’s been fantastic for us to work on the project in partnership with County Museum Dundalk, and we are excited to encourage younger generations to learn and to engage with their national history. We are delighted to have played a part in commemorating the 1916 Rising.”

The museum was recently awarded an Excellence in Business Award from The Public Sector Magazine for its ‘Birth of a Nation’ exhibition. It runs at County Museum Dundalk until the end of 2016. Admission to the exhibition is free.