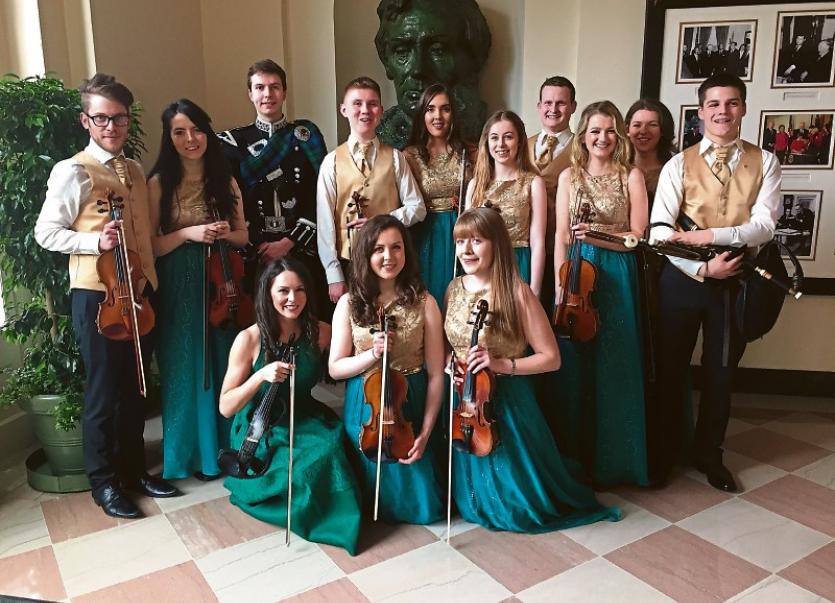 Local violinist Caoilfhionn Darcy was invited to play at The White House on St. Patrick’s Day where she and her fellow members of the Cross Border Orchestra had the pleasure of meeting none other than President Barack Obama.

At short notice Caoilfhionn, daughter of Senator Jim Darcy and Marie-Clare D’Arcy, travelled to Washington D.C. along with fellow members of the First Violin section of the Cross Border Orchestra in what was a whirlwind adventure!

“I have never felt excitement like this in all my life. We received an e-mail on the Tuesday from Sharon Treacy-Dunne who is the Director of CBOI, telling us she had gotten a call from The White House and that we were invited to play along with solo violinist Patricia Treacy on Tuesday for their St. Patrick’s Day Reception. We all jumped at the chance to go!”

The group consisted of ten members from the First Violin section from the Cross Border Orchestra along with Uileann Piper Cormac Keegan and Bagpiper Grahame Harris.

“We played in the White House as people were entering to go towards the Reception. It was in a big white room with marble floors and was just beautiful. We played some Irish style songs to the audience. Politicians such as Enda Kenny, Mary- Lou McDonald and Martin McGuinness were present and Michael Flatley also passed by as were playing. So it was a great mix of people in the audience!’

For Caoilfhionn this trip represented the realisation of a long held personal dream,

“Getting the opportunity to play in The White House is something I have always dreamed of but never really thought the opportunity would come about! Meeting President Barack Obama and Vice President Joe Biden really did make the day even more amazing. I felt so nervous waiting for Obama to enter the room.

“I didn’t know what I was going to say to him or what I was going to do. But it was just surreal seeing him and thinking that, as funny as it sounds, he is a real life person! They were both so lovely and shook each of our hands and took a photograph with us, so I think I’ll be cherishing that memory for the foreseeable future!’

Thoroughly thankful for this wonderful opportunity Caoilfhionn wishes to express her thanks to everyone who helped to make the trip possible,

“Everyone was so proud and excited for us all. My whole family were so supportive and almost as excited as us who were the ones going away! I got so many messages wishing us the best of luck and how we deserved it’.

“But first and foremost I want to thank Sharon Treacy Dunne for everything. She truly is an inspirational woman and just simply amazing. Without her I wouldn’t have gotten half the opportunities I have gotten in life never mind the opportunity to play in The White House. She’s a true legend!”

“The CBOI has been going for 21 years now and the venues that all members past and present have been playing in have been phenomenal from Carnegie Hall to the Royal Albert Hall from Shanghai and recently to the White House.

“As a parent I am so proud of what my children have gained from the Cross Border Orchestra of Ireland. Sharon Treacy Dunne works tirelessly and she gives all the members great opportunities and it’s a great start to those who are going forward in pursuing music as a career”.