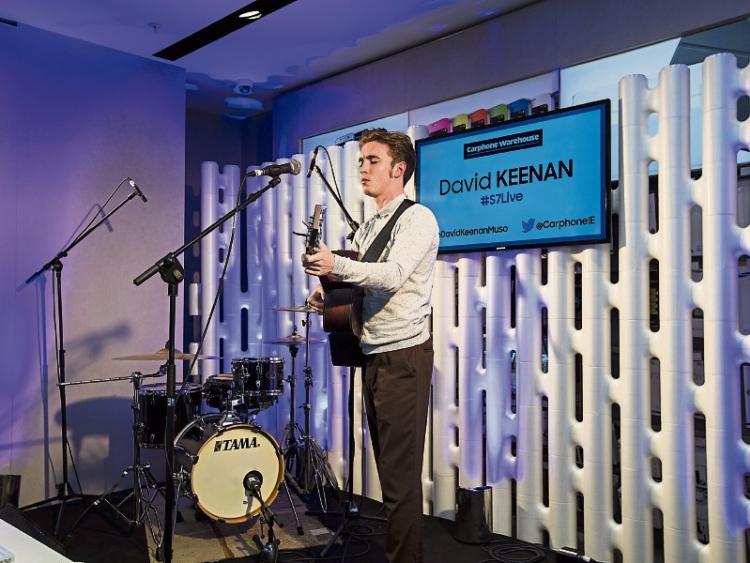 Keenan, who rose to fame after becoming viral hit after featuring in a Dundalk based video clip in 2014, beat off hundreds to claim the prize.

Musicians were asked to submit a video recording of a live performance to be in with a chance of making a shortlist of seven talented acts.

The response was incredible, with bands and solo acts from across the country entering in their hundreds.

Once the shortlist was announced the public was invited to vote for their favourite act and the top three were invited to battle it out on the S7Live stage.

Along with David, Sarah Keane from Mayo and Rofi James from Galway performed in front of a packed audience, including special guest and judge Bressie, at the Samsung Store, , Dundrum Town Centre, Dublin.

After much deliberation the judging panel crowned David as S7Live champion.

He was presented with €2,000 worth of Samsung technology, courtesy of Carphone Warehouse, including the new Samsung Galaxy S7, and will also support an established artist in Dublin's prestigious venue, The Academy.

On accepting his award David said: ‘It’s an absolute honour to win S7Live.

“Both Sarah and Rofi James are incredibly talented acts and it was a privilege to share a stage with them.

“It’s always special to play to a new audience and I’d like to thank Carphone Warehouse for giving me the opportunity to share my music with them.’

“All three acts were stunning but in the end the decision was unanimous. Throughout this competition we have been overwhelmed by the quality of musicians which Ireland continues to produce.

“We’re honoured to have shared this night with three incredibly talented acts to celebrate the launch of the Samsung Galaxy S7 at Carphone Warehouse.”