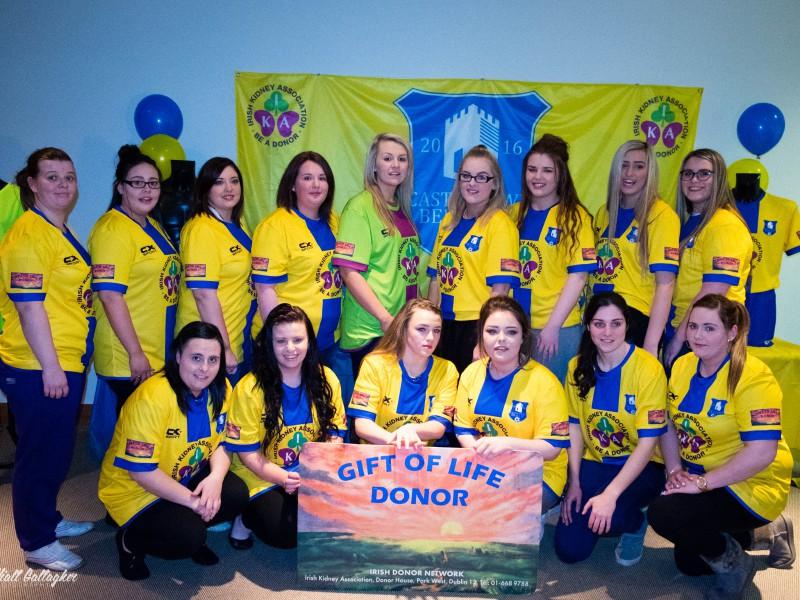 Motivated by his gift of life, kidney transplant recipient Andrew Gallagher together with the Castletown Belles Ladies football team here in Dundalk took part in a photocall to reveal the team’s new jersey which promotes organ donation.

The photocall took place at the Ramada Resort Hotel, Dundalk on Wednesday, 23rd March at 7pm.

The event was launched in conjunction with the Louth/Meath branch of the Irish Kidney Association to announce the forthcoming Organ Donor Awareness Week campaign (details attached) which will take place from 2nd-9th April.

Andrew, (31) a founder member and coach of the ladies team underwent a living donor kidney transplant with his donor mother-in-law Jacqueline Foster in November 2013.

The Castletown Belles ladies team jerseys prominently display the Irish Kidney Association logo and the message ‘Be a Donor’ on the front as well the organ donor card on both sleeves.

Prior to his kidney transplant Andrew had received dialysis treatment for 30 months.

His daughter Evie (now 3 years old) was just a baby at the time the transplant operation went ahead at Beaumont Hospital. Andrew’s father, Niall Gallagher is the Chairman of Castletown Belles. Andrew said:

“I would like to thank thank the whole team for coming behind this initiative to raise awareness about organ donation and also thank Valerie Brady the national chairperson of the Irish Kidney Association for attending our launch event.

“I am delighted that the team has wholeheartedly supported this organ donor awareness initiative along with our team wear sponsors Déjà vu Hair Design and Dealgan Coach Craft.”

Organ Donor Awareness Week 2016 which is organised by the Irish Kidney Association will take place from 2nd until 9th April.

The campaign will feature RTE's Vivienne Traynor in radio advertising as well as on posters, encouraging the public to support organ donation.