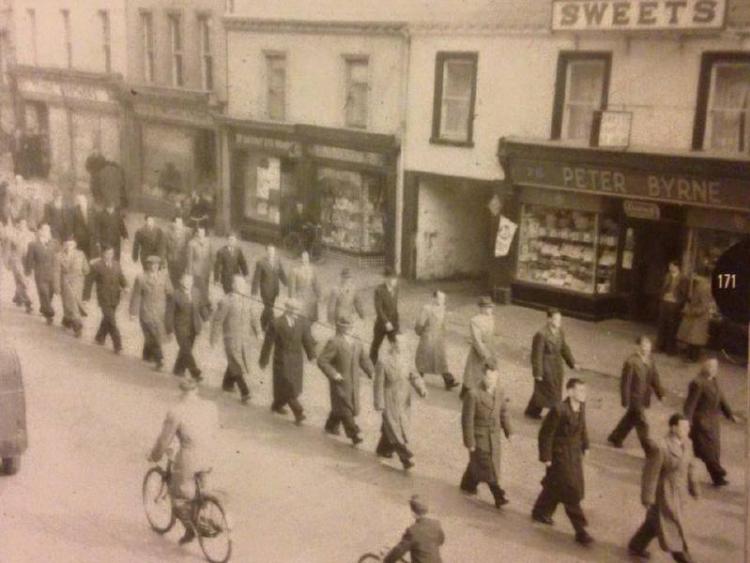 On a number of occasions recently, arising from the 1916 Centenary Celebrations, a number of people have asked me 'why were the events following the 1916 Rising never taught, or even spoken about, in Irish schools in my youth?'. Well, the answer to that question is a complicated one but the article in the 1916 supplement in last week's Democrat about the May 1910 incident at the Courthouse Square gives a bit of clue as to what was happening in Dundalk subsequent to the establishment of the Sinn Fein movement here in 1908.

I have read a lot about this incident at the proclamation of George V as King of Ireland at the Square on May 9, 1910 and even written about it on a number of occasions. I believe that the best evidence as to what was going on can be found in a number of photographs taken on that day. There are quite a few of these photographs in circulation and one of them was even made into a postcard which was reproduced in Victor Whitmarshes' illustrated book 'Old Dundalk'. Many of these old photograph’s are very blurred but I believe that the very best and clearest one appears on the cover of H.G. Tempest's 'Gossiping Guide to Dundalk' which was first published in 1917 and enlarged and revised in 1920. The very latest edition was was published in 2008 and I am not sure if this was the first time that the 1910 Square photograph appeared on the cover.

It does indicate, however, that there was a very strong military presence which, I believe, was made up mainly by a unit from the Royal Field Artillery Brigade, based in Dundalk Military Barracks at the time.

What is clear from this photograph, and others I have seen, is that there appears to have been a very strong local support for the British institutions and that the Sinn Fein protest group were very much in the minority. The unpalatable fact, for some, is that, at the time of the 1916 Rising, Dundalk was overwhelmingly a Loyalist town. I have even heard it being referred cynically to as 'a garrisoned town'. This, it seems to me, was worse than being referred to as 'El Passo' at a later date. There may be some truth in this assertion however, as, for over 100 years, the Dundalk economy depended greatly for employment and finance on the presence of a large military base here. According to Harold O'Sullivan, in his book, Dundalk A Military History, in 1901 it was reported that the local cavalry regiment were to be transferred to the Curragh Camp and would not be replaced. 'This prospect' he writes, 'sufficiently alarmed the Chamber of Commerce that a committee was established to negotiate with the Army authorities on the matter. It was estimated that the withdrawal of the garrison could cost the town 40,000 pounds (weekly?) in lost trade.' It is not surprising, therefore, that there was a lot of support locally for the British monarchy in 1910!

Something else in relation to the 1910 protest, pointed out by a friend whose relatives were involved, is the that the Sinn Fein group were able to stand their ground in defiance of the police is that they were on 'private property'. The reason for this was that the 1798 Commemoration Committee had purchased (or was it just leased?) the small plot on the Square in 1897 for the erection of the Maid of Erin Statue on it in following the year. It appears that the ownership of this plot had passed to the Dundalk Urban District Council when they were established in 1899 and Paddy Hughes from Park Street was a representative of the South Ward on this Council. Paddy was to become Chairman of the Council in 1914 and his brother Peter, who was also among the 1910 protestors, was to become Chairman some years later.

When I was child in the 1940s, a great 'put down' in any political argument was to ask the question 'where were you in 1916?' The answer 'I was not even born then!' would not be good enough, as the political affiliations of your relatives might be called into question. So, young people of today might do well to be sure of their ancestry before they get too excited about celebrating the Centenary!