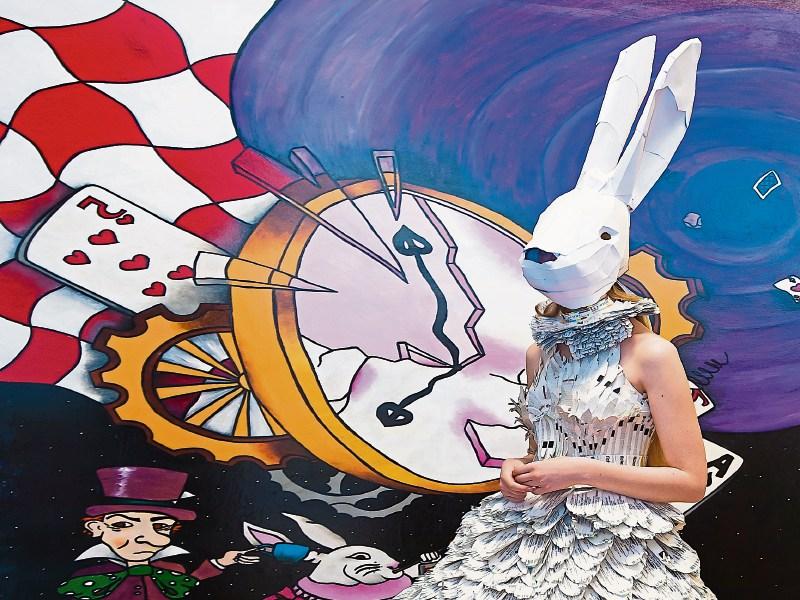 For the first time ever two costumes from Coláiste Rís have reached the final of the Bank of Ireland Junk Kouture Recycled Fashion competition.

The school participated in the regional event last week and they were cheered on by a dedicated group of loyal supporters from the school. The Junk Kouture competition calls for second level students to design and create wearable, fashionable oufits from rubbish that would otherwise be destined for the bin.

The transition year students started this project in September with their teacher Ms. Mardeen Mc Caughey.

Together they collected old food packaging, an old umbrella, fish and chip cones, sweet and crisp wrappers, oriel park football tickets and all manners of discarded items. They then chopped, twisted, plaited, frayed, melted, weaved, glued, layered and used many methods of manipulation to create intricate and amazing garments.

These were then modelled on a catwalk to a 90 second piece of music. The teams were judged on the overall design, the use of recycled materials, the performance on the catwalk and the online vote, which took place a couple of weeks ago.

The show opened at 7pm and Coláiste Rís supporters were full of energy, enthusiasm and good spirit, cheering on the costumes from their own school.

There was 6 costumes from schools in the Dundalk region and 82 in total from all over the East.

When the Coláiste Rís models, Fianait Maye and Rebecca Keenan sparkled, glided, strutted, swished, danced and sashayed onto the catwalk, the little army of supporters went into action and showed their utter appreciation for each of the models.

The two performers from the school did a fantastic job and should be very proud of themselves.

The standard was extremely high this year and the six month effort that the students had made in the creation of these costumes was plain to see.

In the end, out of the 84 entries, 19 were chosen to go forward to the Grand Final in the 3Arena in Dublin, including the 2 costumes from Coláiste Rís. “Winning Today, Old News Tomorrow” and “Tickety Tock Here Comes Alice” sailed through to the Final for the first time in the History of the school and also as the only representatives from Louth.

They will now progress to the National Final where they will model again on the runway in the 3Arena on the 14th of April where Louis Walsh and Hometown will also be appearing.

The school congratulates their students and teacher Ms.Mardeen Mc Caughey on their huge success to date. Continued support is needed by the public to see these costumes crowned overall winners, voting online opens on Monday 28th of March and Closes Friday 8th of April, please log on to Bank Of Ireland Students page on Facebook and follow the link to vote for “Winning Today, Old News Tomorrow “ and “Tickety Tock, Here Comes Alice”.