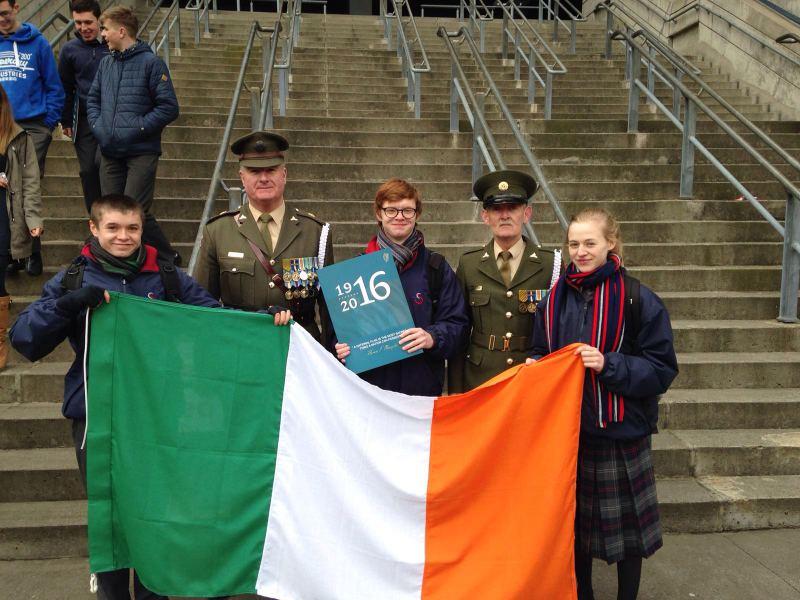 Ardee Community School enjoyed a momentous occasion when it was presented with the Irish tricolour flag at Croke Park last week.

Students Charlotte Lynch and Jack Houlihan and Head Boy Lee Hamill, accompanied by Ms.Murray journeyed up to Croke Park Stadium to collect the flag. This event was all part of the 1916 commemorations.

The event started with an address from the Master of Ceremonies, Ryan Tubridy (His opening remark was about the freezing cold!) But all 6000 in attendance persevered until the arrival of President Michael D. Higgins and his wife Sabina. They entered into the stadium to rapturous applause. The President then proceeded to inspect the Guard of Honour. The school were treated to further speeches from Reverend Michael Cavanagh and a recollection of the life Thomas Francis Meagher, Irish patriot and designer of our flag. There was also a recorded speech from the late, great American President John F. Kennedy from his visit in 1963.

The flag and its meaning were discussed to great lengths: The green- representing the old Irish way; the orange represents the British influence in Ireland; and white in the centre representing truce between the two. It is an enduring symbol of our proud nation. This is evoked in the proclamation which pledges to pursue the happiness of "all the children of the nation equally".

Then they enjoyed an amazing speech from the president. He particularly addressed the students in attendance. He spoke about the pride we should have of our country's rich history. That we were the ones needed to seek change. That we were the ones who must pursue peace, happiness, religious and civil liberty, equal rights and equal opportunities. Without doubt, he had the audience hanging on his every word, both English and Gaeilge.