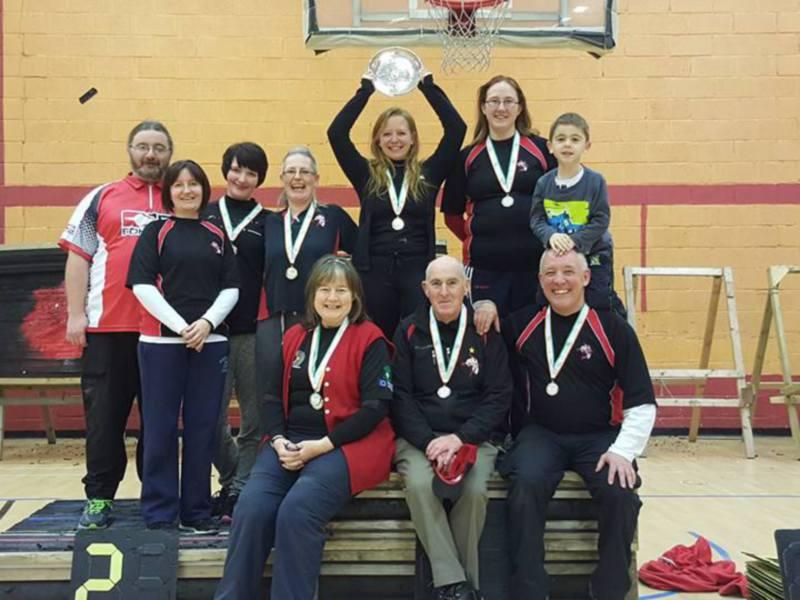 CúChulainn Archers hosted and competed in the Indoor Championships at the Phoenix Centre, Carrickmacross recently moving from their usual venue Ardee Parish Centre because of space considerations.

With Archers from all over Ireland competing, including three former Olympians, it was a busy and highly competitive weekend.

The championships started with junior and master seeding rounds, followed by the knockout (elimination) rounds with the number of archers being whittled down to the medal matches. CúChulainn Archers Deirdre Rogers came away with the Gold Medal.

Both Adrian Quinn, CúChulainn and Deirdre were knocked out at the quarter final stage of the Senior Woman's Compound, with Adria scoring a personal best score.

All three CúChulainn Archers men competing in Senior Mens Compound, Éamonn Rogers, Fiachra Mac an Bhreithiún and John Keenan, were knocked out at the one eight stage, with John scoring a personal best in his final match.

Shona Judge, Ann Marie Murray and Michelle Williams, all CúChulainn archers, were unfortunate to come up against one another in the head - to - head knockout stages, starting with Michelle (recurve) and Ann Marie (Irish National Barebow Champion). Though Michelle battled strongly, Ann Marie put in a fantastic 6 tens ending with an unbeatable 87 points out of a possible 90! Great shooting, Ann Marie! Unfortunalely, she next came up against CúChulainn's Shona Judge, and a battle royal ensued, with Shona going through to the next stage. Shona won through to the final to meet Dublin Archers Sinéad Cuthbert, who had taken the title on ten previous occasions! In a thrilling suspenseful final where they equalled scores time and again, Shona triumphed, taking the Gold Medal and the title of National Recurve Champion 2016! Congratulations, Shona.

Next up were the Team Matches, CuChulainn men's Compound Team (Fiachra, John and Éamonn) took the Silver Medal, CúChulainn women (Shona, AnnMarie and Michelle) competing in the Recurve Team where they were unfortunately knocked out in the quarter final, and CúChulainn's Compound Women's Team (Adria, Christina O'Sullivan and Deirdre) also taking the Silver medal.

All in all a very busy, fun filled and competitive weekend for the club, who had nine members competing and organizing what is one of the biggest indoor archery events of the year, and who came home with a total of 2 Gold, 6 Silver National Medals.