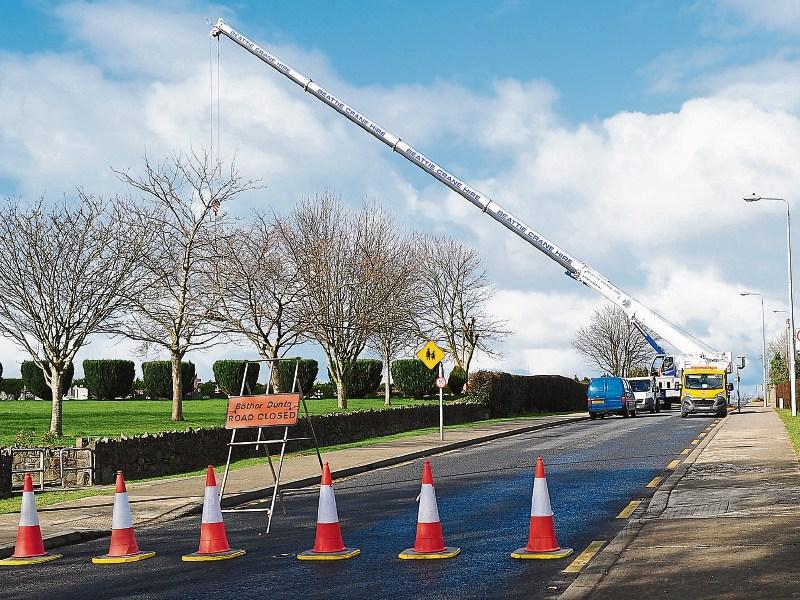 A local road in Kilcurry was closed this week to allow for the installation of a monument to the late Edward Haughey.

The closure was needed as such was the size of the monument, a large crane was needed to lift it into the graveyard.

“Everybody respects his familys grief. The fact that a road was required to be closed to facilitate the erection of a grave monument gives some indication of the scale of the monument. I believe it is a matter for the parish to consider the design and scake regulations in their graveyards.”

However Cllr Sharkey was disappointed that he road was not closed to faciliate speed reduction measures.

“The announcement of the road closure aroused hope in the community that it was to allow for speed reduction measures. Unfortunately that was not the case.”

Self-made multi-millionaire Dr Edward Haughey was killed in March 2014 when his helicopter came down shortly after take-off in foggy conditions near the estate he owned in Gillingham, Norfolk.

Also known as Lord Ballyedmond, the 70-year-old businessman, who lived in Co Down but who hailed from Kilcurry was considered to be one of Ireland’s richest men, with estimated wealth in excess of €1.07bn.

Best known as chairman and founder of Norbrook Laboratories, the largest privately-owned pharmaceutical company in the world, the father-of-three had a range of other business interests.

Dr Haughey died when the Agusta Westland AW139 came down shortly after take-off near the estate he owned in Gillingham, Norfolk, on March 13, 2014. The inquest found that the accident was due to dense fog and poor weather conditions and not because of any mechanical failure.