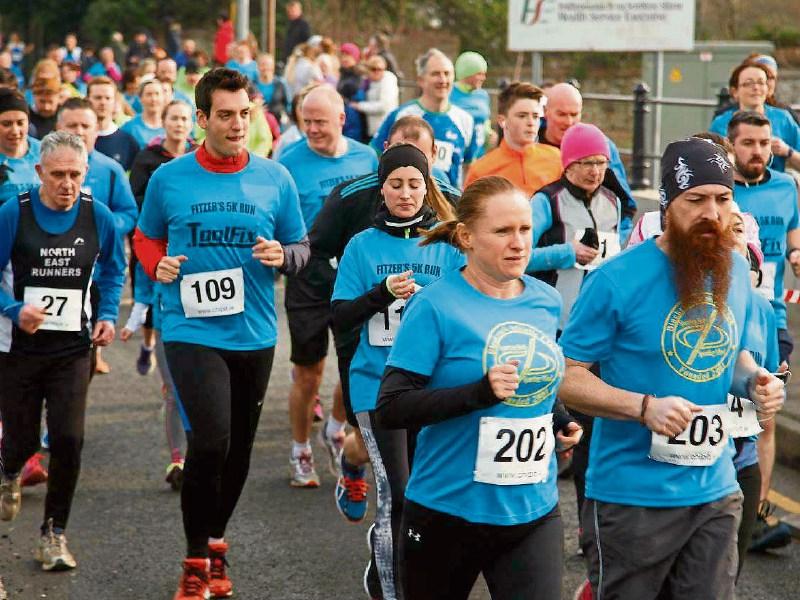 THERE is no doubt that on Friday 26th February last the voting for the ongoing election was foremost on TD Peter Fitzpatricks mind.

The following morning, however, that focus was redirected to the first of the charity fun runs on the athletics calendar this year with Peters very own “Fitzers 5k” taking place in beautiful spring sunshine at the Marshes shopping centre.

Peter’s annual charity run in aid of Maria Goretti Children’s Respite and Rehab Care Resource centre, always brings a party atmosphere to the town and this year proved no different.

Sponsored by Toolfix, the run was attended by an enthusiastic crowd of serious and fun runners alike all moving to keep warm in the chilly morning air.

The fact that this was the first 5k run of the year in the events calendar meant that it was well attended, not only by the local athletics clubs, but those wishing to roll back the numbers on the scales a bit after a great if somewhat overindulgent Christmas. This race is a favourite among the couch to 5k groups who target it as their first real challenge of the year and as Christmas fades into memory, the personal goals of the year began in earnest. All the hard days of training led to this day. Everyone gathered together to pose for photographs before the off and the game plans were put into action.

As ever, Blackrock was well represented this year and with the enthusiasm and determination we’ve come to expect from this lot, they took off up the road at a competitive pace. Winter training is never easy and this winter in particular tested the commitment of everyone as cold and wet seeped into tired bones and worn bodies. The icy roads around the village played host to many runners over the previous few months and most people had this particular run in mind as the first target of the season.

As if to say “you’ve made it” the weather on the day cast away the damp and dark clouds of winter to reveal some welcome sunshine as it seems to do every year for this particular charitable event.

Though Fitzers 5k is a flat course it remains a challenge for all who take part. Anyone who believes that the Avenue road is long should run it. This protracted stretch of tarmac seems to have no end as you chase down the runners in front of you. One long stretch of road turns onto another at the Inner Relief road, but the cheers and encouragement from family, friends and onlookers alike seemed to inject the tired athletes with new strength as they powered on with great determination.

Cars honked and passengers waved as traffic slowed to watch the proceedings. As the runners turned onto the Ramparts the end crept ever closer. Cheering crowds could be heard outside the entrance to The Marshes Shopping centre and a last effort was made to cross the line looking as strong and good as you possibly can after putting in such a herculean effort.

With the funds raised for very worthy charities and the camaraderie and sense of goodwill exhibited among all who attended, this event made for a very special experience indeed and the whole thing was a tremendous success.

After all the tired bodies crossed the line and all the times were recorded the athletes caught their breath and a bite to eat in the well-stocked hospitality tent and competitive frowns were replaced by friendly smiles as everybody hugged and congratulated each other on their achievements. Peter himself played sentry at the finish line applauding in the finishers as they dipped beneath the clock.

The Fitzers 5k is a fantastic charity event run superbly well by an outstanding group of volunteers and is just real good fun. You don’t have to be a seasoned athlete to do it. It really is the definition of a fun run.

Put it in your calendar for next year. Run it, walk it, alone or with friends but do it. All who complete it have a sense of elation and achievement that lasts for days or longer. Now who wouldn’t want that?