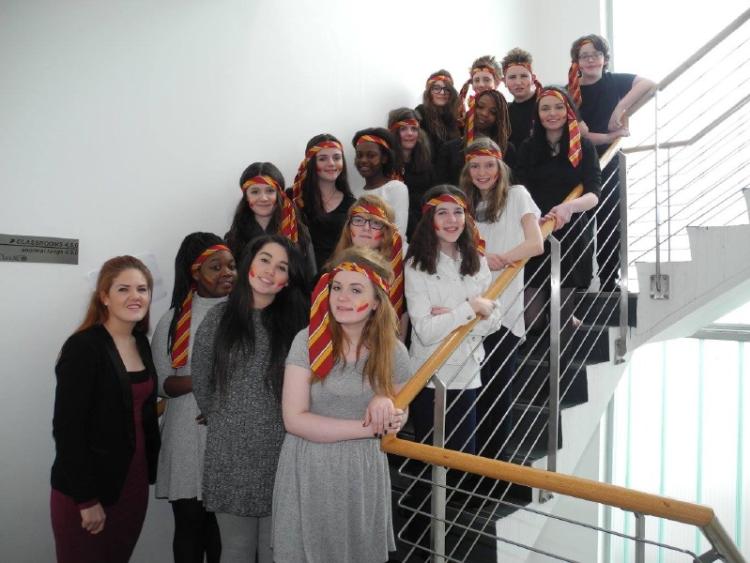 Scléip is a national talent contest for Irish-medium and Gaeltacht post-primary schools which is organised by Gael Linn and the national finals took place in the Amharclann Chlasaic in Clontarf.

The contemporary arts and music competition attracts entrants from across the country and Coláiste Lú were up against schools from Monaghan, Dublin, Limerick, Cork and Kerry.

Four groups of students from first, second and third year had entered the regional qualifier in Derry and all four groups made it to the national finals. The students and the Coláiste’s music teacher, Rachel Ní Channan, put in some fantastic performances with three of the four groups claiming All-Ireland titles.

In the group singing section, the Coláiste Lu group, Na Reibiliúnaigh, came out on top with their creative cover of David Guetta’s Titanium. First year student, Rauirí Mac Closcaí, took first place with his original and modern interpretation of ACDC’s Thunderstruck on concertina. Finally, the group CLÚ (Justin Ó hÁgáin, Morgan Ní Challada-Raifeartaigh and Princess Saliu) claimed the national title in their section with a powerful performance of “Titim Spéire/Skyfall” by Adele as Gaeilge.

The final group from the local Colaiste made up of Fírinne Nic an tSaoir, Lauryn Ní Riain and Sionnain Nic Cána composed and arranged an original piece titled “Mo Bhóthar” just lost out on top spot but received a commendation from the judges for the high standard of their composition and lyrics.