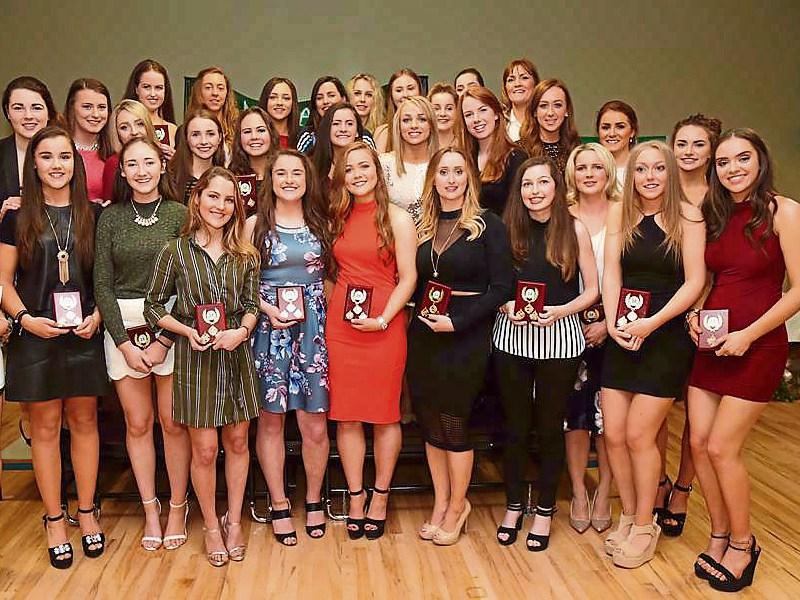 A PRESENTATION night was recently held to recognise the success of the Geraldines Ladies Football teams last year in the 2015 Season. The achievements of the boys under 14s were also recognised on the night.

The night was a spectacular success which started with the display of the Sam Maguire trophy which was produced by Paddy Andrews, a member of the Dublin Championship team last year. Roughly three hundred people, got photographs taken with the player and the trophy.

MC Brian Cafferty summed up the night stating his appreciation to the guests for their support and time given to the Geraldines on their night recognising the achievements of their Ladies teams. He noted the success of each age group in the club culminating in the success of a rejuvenated Senior squad which bodes well for the future.

He also recognised the strength of the club going forward with large numbers playing in each age group, with active family support as was witnessed by the great attendance on the night. Particular tribute was paid to all those volunteers working hard behind the scenes who have generated the growing reputation and success of the Ladies section of the club since its inception a few short years ago.

Laura Matthews received a special award on her retirement from Ladies football for her contribution to Ladies Football in the club. The presentation was made by Lyndsey Davey. Rebecca Carr, Ciara O’Connor and Alannah Finn also received awards from the Geraldines in recognition of their representation on the All Ireland winning Louth Ladies team. The awards and winning medals were presented jointly by Lyndsey Davey and Amanda Lane (Ladies Co. Board)

A spokesperson for the club said,

“The strength of numbers at all ages suggests that the future is bright for Ladies Football in the Geraldines and hopefully, should they achieve their immediate ambition of establishing themselves in the top level of adult football that they may then look forward to winning their fair share of senior trophies. Also they look forward to continuing to challenge in all competitions at juvenile level as the club continues to progress’.

And as to the near future,

“Louth are already in competition in the National League with an increased representation from the Geraldines. Club football commences at the end of February and the club are looking forward to the challenge at the top level this year. Juvenile competitions begin in the first week in April”.