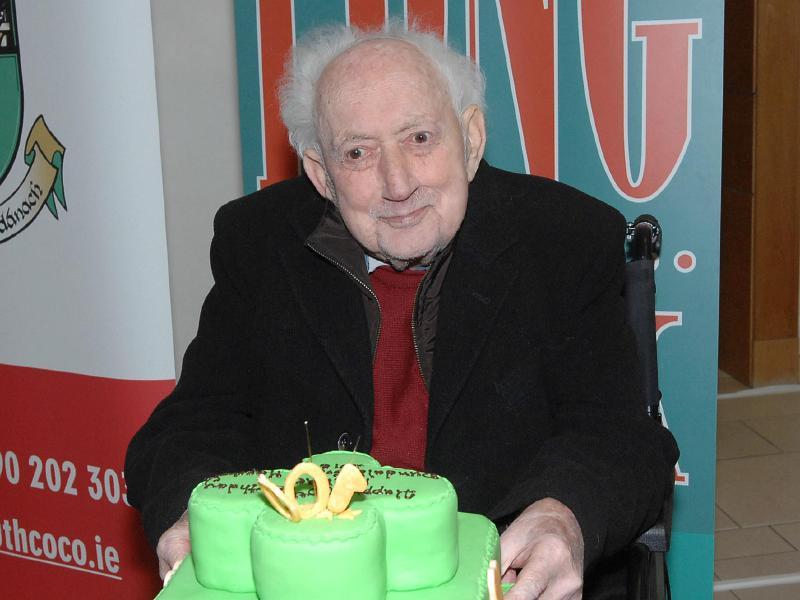 Music and dance were the highlight at the launch of this year’s St Patrick’s Day Parade which was held in An Tain Theatre on Thursday evening last.

The parade committee where delighted to have local man Michael Murphy and his family in attendance following his appointment as this year’s parade Grand Marshall, Michael celebrated his 100th Birthday on the 16th February which ties in perfectly with the parade theme of ‘A Century Past – Reeling Through the Years’.

Parade organisers Dundalk Bids and Dundalk Chamber were also delighted to welcome representatives from our main sponsors, Gerry Cunningham from Fyffes, Tom Darcy from Dundalk Credit Union and Cllr Maria Doyle from Louth County Council whose support will go towards creating a great family and community day on the 17th of March. Elaine McGeough from the Longwalk Shopping Centre who is sponsoring one of the main floats for the parade said: ‘Each year the parade is growing and getting better and this year we hope that the main float will really have that Wow factor and have people talking for years to come’

The entertainment for the evening was provided by Carmel Connolly Irish Dance School and Comhaltas Ceoltóirí Eireann, Dún Dealgan.

The attendees then sang Happy Birthday to Michael as he was presented with a special birthday cake provided by Cinnamon Bakery in the shape of a shamrock.

With an estimated 20,000 spectators attending last year’s Dundalk St Patrick’s Day parade, we expect this year’s parade to be a bigger and better event with wonderful entertainment for all the family.

Keep an eye on our Facebook page -St. Patrick’s Day Dundalk for further up-dates on the parade and surrounding events. This year’s festivities will start with the St Patrick’s Eve concert February 16th in An Tain Theatre which includes a performance by Charlie McGettigan.

The parade will start at 1pm on Thursday 17th and will be followed by family fun and entertainment zone at the Market Square until 5pm. Food vendors who wish to set up camp at the Market Square area please contact committee member Mandy Fee of Pelican Promotions on 0872222100.

If your club or group are interested in taking part in this year’s parade, please email certs@dundalk.ie or phone 042 9336343 where you can get the necessary information from Ann or Kim.