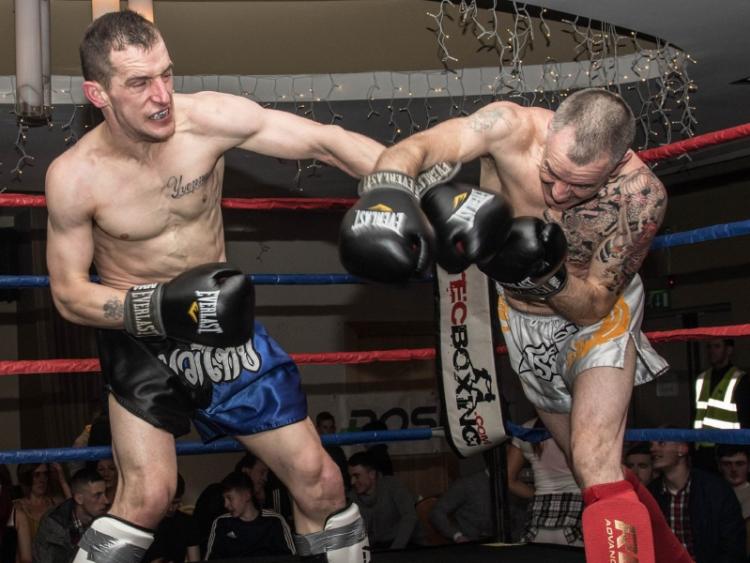 Dundalk Thai Boxing got 2016 off to a fantastic start when club members travelled to the Park View Hotel in Wicklow last weekend for their first competition of the year.

Dundalk fighter Pete Conroy faced off against local fighter Andy Mulligan, of Jai Sua Bray, in the 61kg weight category. The event was run as a fundraiser for Bray man David Keogh who lost his life whilst on holiday in Portugal with his family.

Pete was particularly keen to support the event after losing his brother Paul in tragic circumstances in the run up to Christmas. The two lads were very close and both trained together at Dundalk Thai Boxing with Pete describing his brother as his ‘rock, best friend and brother all rolled into one.’

Pete wanted to honour Paul’s memory by performing well and he certainly achieved that and much more. He took part in a strict training regime in preparation for the event and was given huge support by his family. In the build-up to the fight, Pete and his sisters, Wendy and Anne Marie, both completed the gruelling Hell and Back obstacle course earlier this month to help raise funds for SOSAD.

Conroy’s level of physical fitness and mental toughness played an important role in his tactics against the more experienced Bray opponent. He started the first round off by staying light on his feet, not allowing Mulligan to get set. When his opponent attacked, Pete easily evaded, and, adhering to the theory of ‘make him miss, make him pay’ caught his opponent on the counter attack.

The strategy proved highly effective, so much so that in round one, Conroy’s opponent dropped his hands to his side in an outward expression of exasperation. Mulligan eventually landed an outside leg kick but Pete closed the distance and landed a knee to the mid-rift. A bombardment of side knees followed with both fighters enjoying the upper hand at various times before the end of the round.

In round two, Mulligan attempted to draw Pete into a slugfest, forcing the Dundalk fighter into a change of tactics. The hometown boy attacked with a flurry of kicks and punches but Conroy escaped intact.

The final round saw Pete dominate from the bell, pushing forward with combinations and forcing his opponent to fight off the back-foot. His tactics proved effective as Pete took round three meaning that the end result of a very bruising and fast paced encounter was a draw.

The fight may have ended in stalemate but Conroy had already proven himself a clear winner before the first punch was thrown. At the pre-fight health assessment earlier in the day, a fighter from another club cracked under the pressure but Conroy took the fighter away for a walk and a chat and got him through his assessment, a testimony to Pete’s character and goodwill.

Dundalk Thai Boxing Club are next in action on April 23 at the Ramada Inn hotel on the Armagh Road in Dundalk when the club host their own ‘Thai Games Fight Night’ which will feature several local fighters against an Irish Selection.

The club train every Monday and Wednesday at 6:30pm and Friday at 7pm in the Dundalk Combat Academy on the Coe’s Road East. New members are always very welcome.