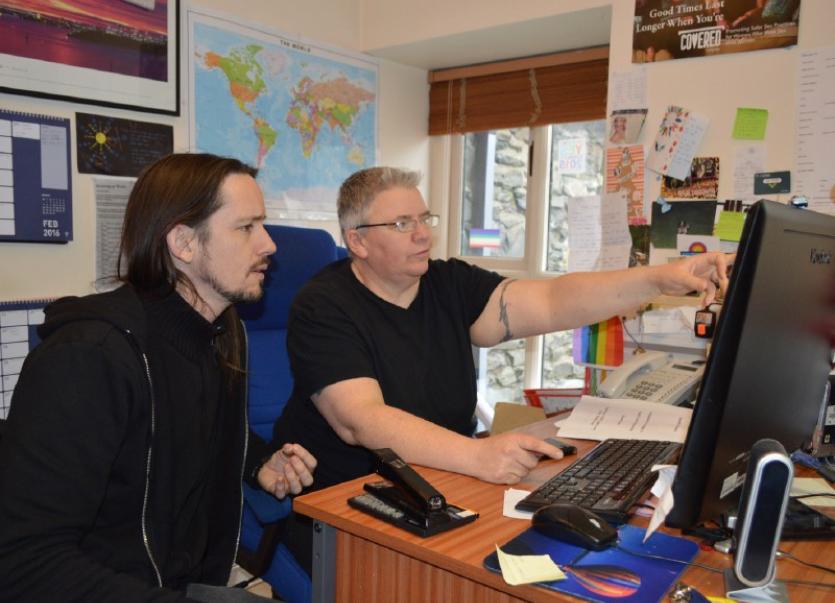 In 2014 the community centre for LGBTQ people here in town had a European volunteer student working with them, that wanted to look at creating an online resource for LGBTQ cyber-bullying.

“We applied for a volunteer student from Serbia to come here,” Bernadine Quinn, the centre manager, told the Democrat. “And her task was to organise a youth exchange to develop something that was relevant to young LGBTQ people, we felt an ebooklet would be very useful.”

They felt that there was a need for it. John Murray, youth co-ordinator of Dundalk Outcomers, described homophobic bullying on the increase today.

“(It is) one of the most prevalent forms of bullying in schools today," he continues, “even something as common as saying 'that’s gay' can have an impact on a young person gay or not.”

The volunteer student found a group suitable to the task, an LGBTQ group in Cyprus called Accept LGBT Cyprus. So in September of 2014, the Outcomers team and ten young LGBTQ people (all over the age of 18) went to spend a week in Cyprus for the first Cyprian LGBTQ event ever, to discuss the properties of the booklet, to look at what they wanted it to be, about what it had to target, and to discuss the ins and outs of what it meant. John Murray describes it as being a “Very intensive work process.”

Then in December of 2014 the Cyprians involved came to Dundalk for the week, and by the end of that week the ebook entitled “Towards anti Cyber Bullying” (an –book for LGBT young people) was launched.

The idea for Dundalk Outcomers was to re-launch the ebook and to make people aware of it.

“It’s a very valuable asset,” John states, “not only for LGBTQ people, though it does look at how cyberbullying can be more difficult for LGBTQ, but for all young people experiencing cyberbullying on social media, as it gives clear guidelines on how to deal with cyberbullying in general.”

John's inspiration to get involved came from his own experience of viewing online videos.

“It is very easy for people to say mean things to you if they feel that they are untouchable,” he explains, “if you look at any YouTube video especially one made by a young person and that talks about the feelings of a young person all you have to do is scroll down a maximum of ten comments and somebody is calling somebody else gay.”

“The difference between verbal bullying and cyberbullying is that cyberbullying is out there forever, and can be seen by everyone,” he continues, “That’s why it is so important to bring out an ebook like this, if you’re a young LGBTQ person being bullied, you feel isolated, and online is the biggest way you can meet other LGBTQ people, and find out what it actually means to be gay.”

“I think it’s very subjective, because I think that there are more ways to bully, when I was going to school you could only be bullied face to face. Now you have social media like Facebook and Twitter and they (bullies) have an awful lot more ways to get you at home! I suppose we don’t know if it’s gotten worse but there are certainly more ways of doing it.”

The Democrat looked at a survey carried out in 2009 called “LGBT lives”, the very first of its kind in Ireland, which spoke to over 1100 LGBTQ people living in Ireland about their experiences growing up LGBTQ in Ireland. 80 percent said that at some point in their lives they had been verbally bullied. 25 percent said that they had been physically assaulted because of their perceived sexual identity.

“That has changed” John said, “the department of education and skill brought out a new policy on identity based bullying that specifically names homophobic and transphobic bullying.” John goes into schools across Louth and Monahan to talk about LGBTQ bullying “Usually,” he states, "after being called because of homophobic bullying towards someone who is perceived of being LGBTQ.”

“It used to be,” john says “that if you were picked on for being gay, the initial reaction was that society was on the side of the bully. It made you feel like you are not only a victim homophobia, but a victim of a wider societal stress. I remember going to school far too long ago,” he jokes “and being told that I could only get an earring in one particular ear because getting in pierced in the other ear was gay.

"However I do feel that the marriage equality referendum changed that. It made the LGBTQ community feel a lot more accepted and gives people the courage to challenge the bullies and their comments and feel like they are supported.

“I think as LGBTQ people we have to realise that we are part of a much larger community. We are not just Irish, we are European and there are countries in Europe who treat LGBTQ people very badly and we need to open our eyes wider.” Bernadine continues.

“We had a tremendous success with the marriage equality referendum. We are a country of equals and there are countries aren’t as fortunate as ours and we need to support them as best as we can.”

Reviews of the ebook made it sound very useful. Supposedly it was well explained using labelled diagrams making it easy to understand.

It was very informative. It provided a lot of useful information including a glossary with all of the vocabulary that you should need. Guidelines given include what you should and shouldn’t do when experiencing cyber bullying, and how to protect your identity.

It also has rules on how you yourself should behave online. It gives examples of what affects bullying can have on your mind, body and the emotional and psychological effects, and gives a list of services at you’re your use if you are ever cyber bullied including phone numbers and email addresses.

The Democrat asked Bernadine if she felt that there was enough awareness of it.

“No,” she said, “I don’t think that you can ever have enough awareness. I suppose Leargas, the company that we worked with in partnership around youth projects advertising it makes it available but it is never available enough.”

In the end, Leargas considered it to be one of the most successful projects, according to the testimony of Bernadine.

“They consider our youth exchanges to be very successful.” She explains, “So this year we will be doing another one in March, and the people will work on a project in DKIT College with the LGBTQ community there.”

To access the e book online go to www.lgbtcb.com or to make contact with Dundalk Outcomers, go to info@outcomers.org