The bird 'with no name' returns to Louth wilds 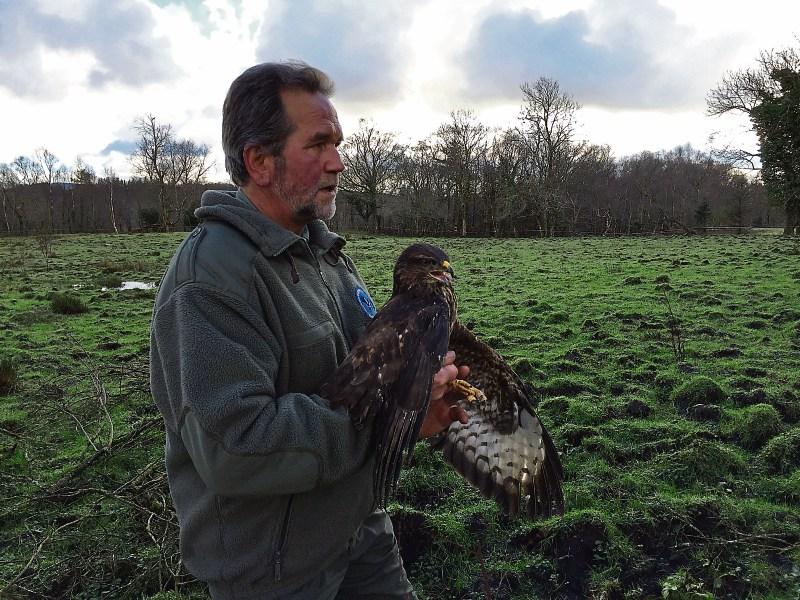 They might be one of the most common birds of prey in Ireland, but if you ask most members of the public they probably couldn't tell you too much about the 'common buzzard'.

Yet yesterday (Monday) one such buzzard was released back into the wilds of Louth, after spending over a year recovering from some catastrophic injuries.

The buzzard was released on Spencer Hill, Williamstown, just south of Castlebellingham.

The story began in January 2015, when Mary McWilliamson found the injured bird in Williamstown, Castlebellingham.

The female common buzzard had a broken wing and a badly damaged leg. Ms McWilliamson contacted the Eagles Flying Animal Sanctuary in Sligo, and they took the bird under their wing.

Speaking to the Democrat, Owner and manager of Eagles Flying - Lothar Muschketat - takes up the story.

“We specialise is birds of prey, but give santuary to all kinds of animals.”

Situated amid the beautiful landscape of North-West Ireland is Eagles Flying, the largest Centre for Birds of Prey and Owls in the country.

“We do not name the birds we take in, as to name a bird is to tame it,” Lothar explained. “We don't want to tame the birds. We want to nurse them back to health and to leave them fit to return to the wild.

“Buzzards are one of the most common raptors in Ireland.

“They had been extinct, but in the 1960s they made their way back to Ireland and are once again calling Ireland home.”

The sanctuary often go to some lengths to help repair birds who have been injured, be being shot or hit by cars.

“We think this bird may have been hit by a car - though that is speculation. For birds of prey they can take a little longer to take off and when they are eating carrion on the road this means that a car can come around the corner and they are unable to fly away in time.”

Lothar is at pains to point out that the birds do not pose a risk to livestock.

Sadly, many birds are seen as prey and are shot or poisoned by farmers who see them - in their ignorance - as a threat.

“They do not take lambs. They may eat a lamb who has died, but they are not strong enough to take a lamb.

“They only weigh about 1kg. They primarily live on small mammals and carrion.”

At any given stage the Eagles Flying sanctuary look after 100 birds of prey, and have over 400 animals at their place in Sligo.

They survive by making money as a successful tourist attraction, one of the highest rated Sligo attractions on Trip Advisor.

“We think this bird will do well and presuming nothing malicious happens to her, she could go on to live a long life.

“They are quite a vocal bird, so listen out in Louth. You might just hear her!”