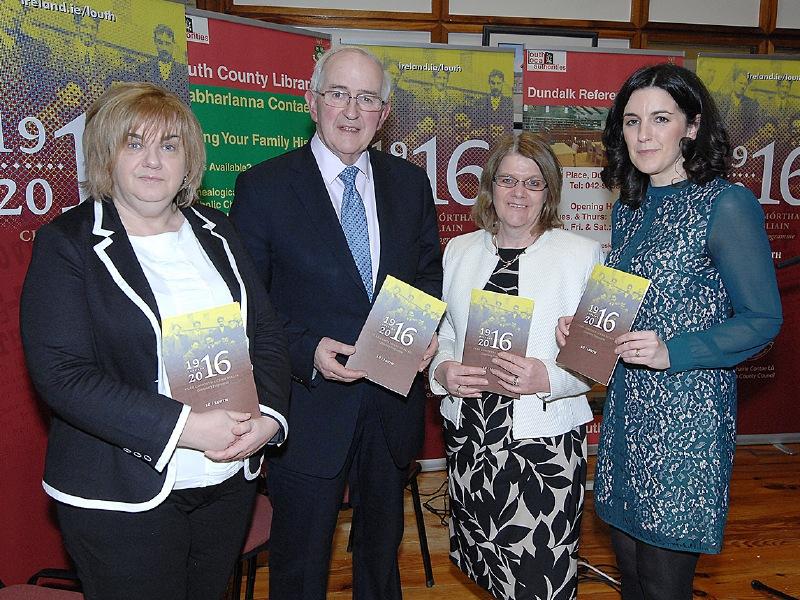 The year-long series of events is part of the 2016 national programme and reflects on the themes of remembering, reconciling, presenting, imagining and celebrating.

“I would like to congratulate Louth County Council on the fantastic and varied programme of events it has coordinated to commemorate 1916 in Louth,” Cllr Savage said at the launch.

“Already more than 50 events have been organised, ranging across all seven strands of the Ireland 2016 programme.”

In planning the Louth 2016 Centenary Programme, Louth County Council sought the views of the local community, through the establishment of the Louth Consultative Committee and by holding public consultation meetings in June 2015 in Dundalk, Drogheda and Ardee.

“We were delighted with the interest shown at our Louth Centenary Programme public consultation meetings and with the submissions we received following our call for programme ideas, many of which will be implemented.”

“The Louth 1916-2016 Centenary Programme is a mix of content of local and national interest,” she added.

Some of the events planned for Louth include:

· Óglaigh na hÉireann 1913 - 1918: The Irish Volunteers, An Exhibition in Louth County Archives for the months of February and March.

· Macalla 1916: Comhaltas Concert consisting of a new orchestral suite of music composed by Michael Rooney, reflecting on Ireland’s history from the Famine times, through the Easter 1916 Rising, to the present day. TLT, Drogheda 27th March.

· Drogheda in 1916 exhibition and series of talks. Drogheda Branch Library, March and April.

· Walking tours highlighting places of interest relating to local events from 1916 and prominent individuals who contributed to the period in Dundalk, Drogheda, Ardee and Castlebellingham. April and May.

· The publication of a number of books relating to the events and people of County Louth who took part in the Easter Rising.

· The award-winning Birth of a Nation – the Evolution of Irish Nationhood 1641 to 1916 exhibition at County Museum Dundalk from January to December.

Louth Ireland 2016 Coordinator, Louth County Librarian, Bernadette Fennell said: “We are very proud of the wide-ranging programme we have devised to remember and reflect on this period of history. The Centenary Programme is an opportunity for us to showcase some of the fantastic creativity and innovation which is taking place across our community.

She added: “Aimed at broadening our understanding of the events and the significance of the 1916 Rising, Louth’s commemorations include exhibitions, lectures on key figures and events of the Easter Rising, music and theatre performances, and local ceremonial events with the Defence Forces. We will also work with local Tidy Towns Committees in the planning of community gardens and tree planting projects.”

“Our programme of events also highlights prominent Louth natives who contributed to the Rising, and local places of interest, as well as how Easter 1916 and its aftermath was reported in Louth, through local newspaper coverage. Dundalk 1916 Relatives Committee will present a commemorative medal to the families of the Louth 1916 Volunteers. One medal will be commissioned for each volunteer who mobilised on Easter Sunday 1916 from County Louth.

She said: “Our children and young people will take part in a diverse range of events across Louth, including cultural tours, poetry, creative writing and debating competitions. We hope that everyone will find something of interest in this programme.”

Visit www.ireland.ie/louth and www.louthcoco.ie/libraries for Louth’s programme of 1916 related events.