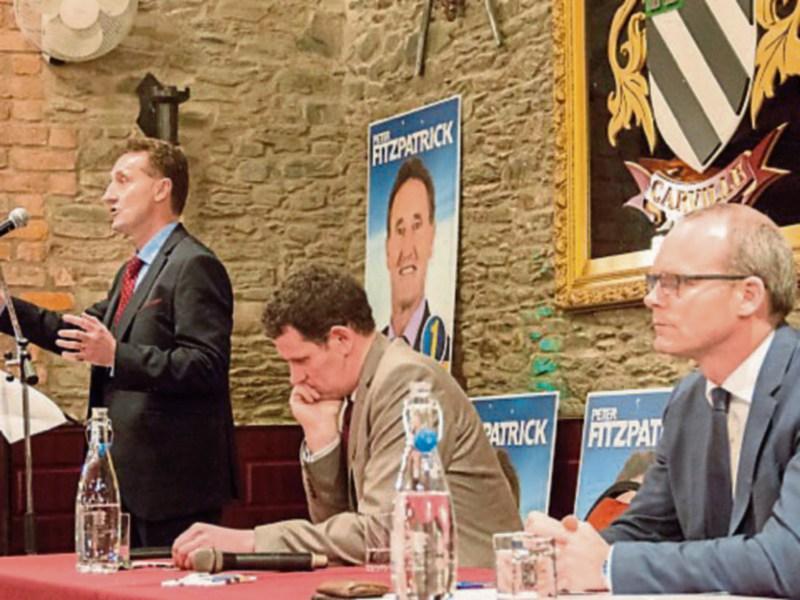 Sitting TD Peter Fitzpatrick got his official election campaign off to a prestigious start at Darver Castle on Tuesday night.

Minister Simon Coveney gave a rousing endorsement to Deputy Fitzpatrick in front of a crowd of 200 or so.

Introducing Deputy Fitzpatrick, Cllr Colm Markey described him as 'unassuming' , disciplined', 'determined' and a man who 'gets the job done'.

“Since Peter has been invovled, Fine Gael in Louth have been gelled in a way that was never there before, and that's a credit to his teambuilding abilities.”

Cllr Markey said Deputy Fitzpatrick's acheivements in the army, GAA and in his business life show that he is someone that gets the job done without making a fuss about it.”

Speaking on the night Deputy Fitzpatrick said he was “truly humbled” to see so many turnout for the event.

“There is no doubt that the next General Election will be the most important in our lifetime.

“We have a very simple but important choice to make, do we continue with the recovery that is now taking place or do we hand power back to the people who were responsible for creating the mess in the first place?

“We have an opportunity to create history in Fine Gael by re-electing two sitting TDs to Dail Eireann in Louth and East Meath for the first time in over 50 years.

Deputy moved on matters more local, saying: “I'm fed up with people talking down about this wee county. Let's be proud to be Louth.”

“When I ran for office the question I was always asked: Why? Why?Why?

“The answer was I wanted to make a difference.

“It's a fragile recovery, and we're not out of the woods yet.”

Following the deputy's speech, Minister for Agriculture Simon Coveney took to the podium and gave a rousing speech.

“I got to know Peter a couple of years ago. I came to Dundalk to take part in an official visit and there was a group that were trying to intimidate and knock us off track.

“Peter was steadfast in the face of these people and you could see he was completely unfazed, and I thought that's exactly the type of person we need in this party.

“You knew he was a leader and a person of real substance.”