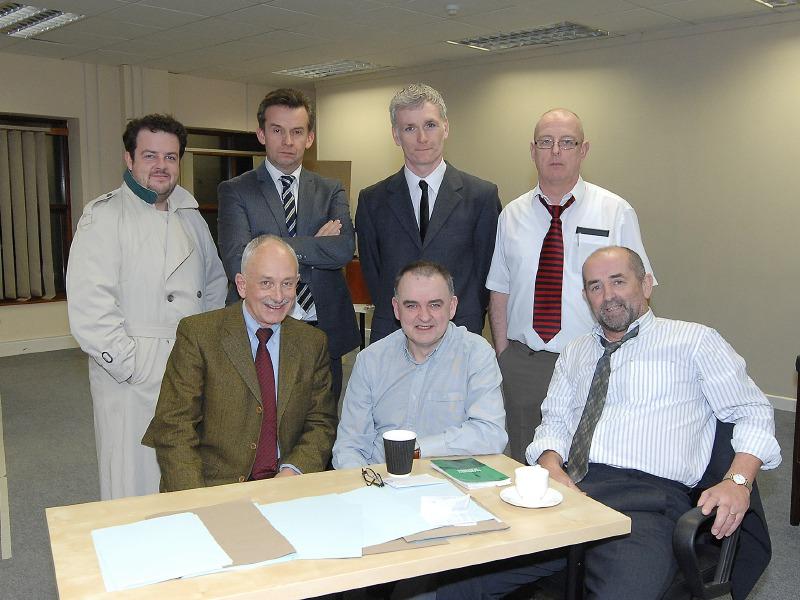 The American Dream has been done to death in the literature of that country. The best examples are The Great Gatsby and Death of a Salesman.

Glengarry Glen Ross by the American playwright, director and screenwriter David Mamet, has been dubbed Death of a F****ing Salesman because of the profanities that colour the dialogue of the characters, so you might say, why do I want to see a play like that in the Town Hall in Dundalk or the Tain theatre as it is now called.

Well, not only is this a great play, one that can really be called a Shakespearean tragedy, with a cast of local amatuer actors the likes of which you will not see better anywhere in Ireland, but you will also be taking part in a bit of amatuer drama history.

For this is the first time this play has been produced by any amatuer drama company in this country.

“This is a controversial play but I’ve always wanted to do it,” the director Matt Murphy said last week when I spoke to him. It was the day before our useless, toothless, Banking Inquiry report was published. When we were told the state could have saved €9bn by imposing losses on debt holders at the six Irish Banks instead of us, the taxpayer.

“The character in this play are driven by the fear of failure which is what the American Dream is all about. Greed. It has all the echoes of our Celtic tiger and the banking collapse that followed.

“We see human fears and insecurities, the banter that hides true feelings, the inability of people to fully communicate with one another. In many ways it reflects Irish life as it is now.

“But there is light at the end of the tunnel. We are dealing with real people here.”

Matt had tried to get the right to produce the play two years ago but had been refused.

“We eventually got them for a production at the Town Hall,” he said. “We then entered it for eight festivals on the amatuer drama circuit but we were then told we could not tour with it. the Town Hall was it.

“But Fergus Mullen, who is in the cast, knew a hot shot lawyer in Los Angeles who got in touch with a contemporary of his in New York.

“This was before last Christmas and it just happened that the author David Mamet's was in New York directing Al Pacino in Mamet's play China Doll.

“This lawyer got on to Mamet’s manager and managed to get permission for us to tour.”

The play is set in an American real estate office - substitute that for our property market in the Celtic tiger years and you are very much at home.

“It exposes the sordid means of attaining the American Dream,” said Matt. “And it shows tha effects the business ethos has wrought upon the characters.”

The play was dedicated to Harold Pinter and first performed not in america, but at the national Theatre in London in 1983.

This is a great American tragedy by a Pulitzer Prize winning author.

But it more than that. It is a universal tragedy because it speaks to us all. It has that rich deep emotional quality that marks all great drama.

“Like every great human story it shows there is light at the end of the tunnel,” director Matt Murphy said.

How they have come up with it is a real triumph.

Then it hopes to have the required nominations for a place in the all-Ireland finals in Athlone.

It will run at The Tain Theatre here in the town Hall Dundalk from Wednesday 10 February to Saturday 13 February.

It’s not to be missed.