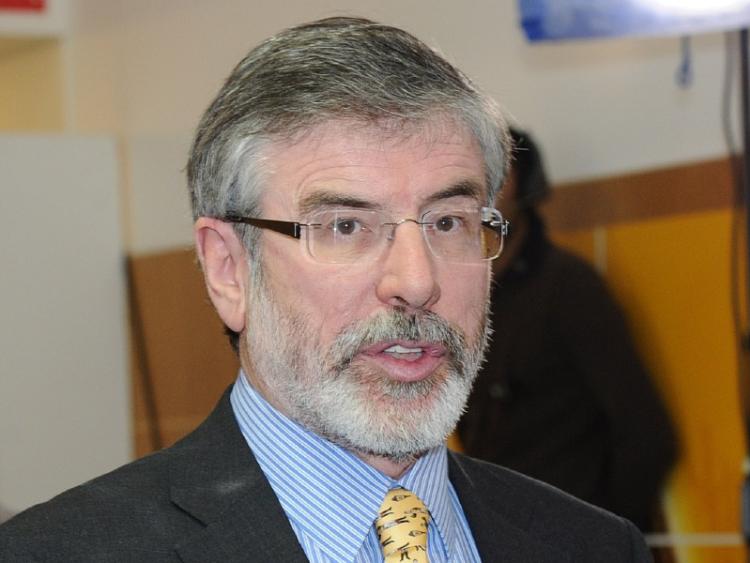 Sinn Féin deputy Gerry Adams has called on Louth County council to bring the Woodland Park halting site up to the legally required standards so that the evicted familes can return to their homes.

Mr Adams said at the protest at the County Hall on Friday that the familes should have been consulted and treated with respect. He also called on other local Oireachtas members to lobby the Minister for the Environment Alan Kelly to intervene in the ongoing Woodland Park eviction crisis.

“I am also concerned that 15 of the 22 families who were evicted from the Woodland Park site are now being threatened with eviction from a carpark beside the KFC,” has said.

“Louth County Council has a legal obligation to accommodate homeless families. There is an unprecedented housing crisis in Louth. Five thousand people on the waiting list. It is bizarre that the council action has made even more citizens homeless.

“No social or affordable housing was built by the Council in 2015. The government did not give any funds but there is available funding for Traveller accommodation.

“The solution to this problem is to draw down this funding to refurbish Woodland Park site and other sites if necessary.

“The other TDs and senators have been silent on this issue. I am appealing to them to call for Minister Alan Kelly to intervene urgently.

“There is also a whispering campaign against the Travellers and Sinn Féin and me in particular. I am told this is coming from Labour and Fine Gael though I have no proof of this. They are saying that Travellers are trying to jump the housing queue and that I support this.

“The Travellers don’t want rented accommodation. They are not looking to jump any waiting list. They are no threat to other homeless people.

“The Travellers want the halting site developed and in time they want accommodation in keeping with their culture. This will not cost the ratepayers of Louth.”

Deputy Adams also raised the issue in the Dail. He said the families are very dissatisfied with the approach of the council. The only alternative being proposed by the council is private rented accommodation which many of the families are unhappy with.

“The common sense resolution to this issue is to urgently bring the halting site up to health and safety standards so that the families can stay in their homes.”

Taoiseach to urge Minister Kelly to use his authority to prevent any further eviction.”

Deputy Adams has also stated that some hfamilies have had to sell their mobile homes for small amounts of money because of the council’s eviction process. This has added to the trauma for some.

“I understand that some of those evicted from the site have had their social welfare payments stopped because they are no longer resident at the addresses they had given to the social welfare department.

“So families have suffered the indignity and trauma of eviction by the council and the state has now stopped their welfare payments.”