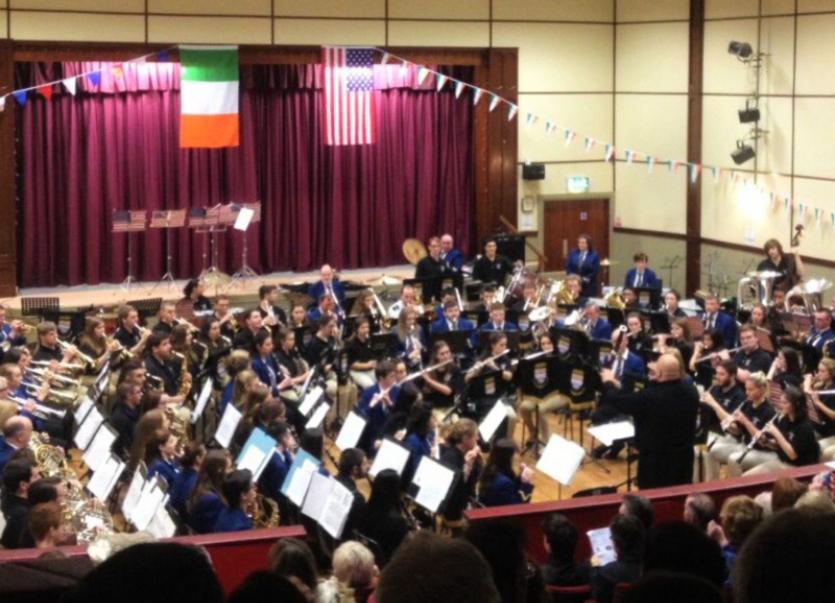 Ardee Concert Band had a fantastic night in the Bohemian Centre with the Sacred Heart University Concert Band from Fairfield in Connecticut, USA.

The Ardee side put on the warmest of welcomes towards the Sacred Heart University group who had travelled all the way up from Kerry where they were based in Dingle for their stay.

After a long day on the road they put on a wonderful programme alongside the Ardee Concert Band.

“We thank the SHU Band so much for their wonderful gifts, presented to Ardee's Band Director Brendan Breslin a framed, signed and mounted photo of the SHU band in concert and a full score of music to a march played by the SHU on the night,” said Ardee PRO Sinéad Nutley.

“ it was an amazing gift and all of us here in Ardee were so touched with the presentation."

The Ardee Concert Youth Band under the direction of John Gaynor opened up the night with an American March and their programme went down an absolute treat with the audience and with the SHU band who were also seated in the audience until it was their turn to take to the stage.

The Senior band took to the stage next with their programme opening again like the youth Band with a hymn loved well by America; Amazing Grace arranged by Composer to the American Presidents own Army Band, Sammy Nestico, with solos from Mark Mc Loughlin, Dermot Murray and Aisling Reilly.

The senior band received a standing ovation from the Audience after they concluded their spot with an Elvis Favourite: An American Trilogy arranged by band member Paul O'Brien.

The Sacred Heart University Concert Band, watched by the Ardee band filled the stage with their 65 strong band and played a marvelous programme opening up with a Gavorkna Fanfare. They played a Haitian Funeral March; Chery Marche Funebre by Occide Jeanty, a copy of this piece was gifted to Ardee as the SHU have been the only band to play the march outside of Haiti, where the Conductor heard it on his travels to the country in 2012.

The ever so Grand Finale comprised of 110 musicians from Ardee and the SHU Combined to play three pieces.

Members of both bands then got the chance to mingle and everyone could have a chat away from the atmosphere of performance, in the relaxed social setting of the Bandroom.

Ardee Concert Band are Supported by Music Network’s Music Capital Scheme, funded by The Department of Arts, Heritage and the Gaeltacht.

Music Network is funded by The Arts Council.