Adrienne's Hare is on the March 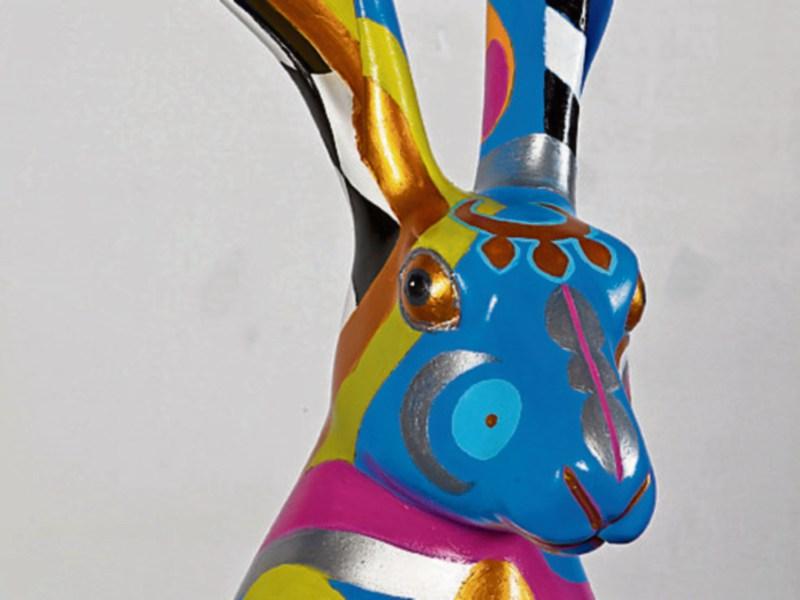 BLACKROCK Artist Adrienne Finnerty is one of a select group of artists chosen to take part in a unique Dublin based art display, ‘110 hares on the march’. The event which will run for the next 2 months will see 110 hares, including ‘Conor McGregHARE’, displayed at 50 locations in Dublin for the next 2 months in aid of Jack & Jill.

The charity event which sponsored by Lily O’Brien’s was launched last week in the Chester Beatty Library in Dublin Castle with invitation from the charity to find the hares and perhaps buy one.

Adriennes Hare entitled ‘Hare'ess Ostara’ forms part of the army of 110 on display at over 50 locations in Dublin for the next 2 months. The piece which is true to Adrienne’s trademark vibrant, colourful style and is sure to attract attention of potential buyers.

“ At full moon legend has it that Ostara changed into a hare. The hare is a symbol of new beginnings. A rejoicing at the rebirth of life. A symbol of balance, creativity, regeneration, eternity, madness & genius. My inspiration for Hare'ess Ostara is the Spring Equinox, the Dawn and enlightenment. A time when hares go crazy. Spring is the daybreak of the year, the Equinox a time of balance between night and day, masculine and feminine”.

Other’s amongst the army include: “Conor McGregHARE” designed by Niall O’Loughlin and dressed by Louis Copeland, “Warrior” Hare commemorating the 1916 Easter Rising designed by Miriam Smithers from Dublin, “Heaven Sent” hare by Sarah Malin, Dublin, “Space Hopper” by Siobhan O’Leary, Cork and “The Secret Garden” by Frances Ryan, Co. Down.

The hare art work can be purchased for home or office through Jack & Jill’s online auction at www.jackandjill.ie or through the live auction on 15th March when the hares go under the hammer of DeVeres in the Royal College of Physicians of Ireland, but it has to be found first!

All the hares are individually coded and anyone can enter a fun competition to find them with prizes galore including a year’s supply of Lily O’Brien’s chocolate. The charity is hoping that funds raised will make a big dent in the €2.7 million it needs in 2016 to provide home nursing care to sick children nationwide.

The Chester Beatty Library in Dublin Castle is one of over 50 locations in Dublin hosting the hares, each with their own story and people are encouraged to do the hare trail by picking up the map at any of the locations, including Arnotts, Easons, St. Stephen’s Green Centre and The Chester Beatty Library at Dublin Castle, with plenty of prizes up for grabs including a year’s supply of Lily O’Brien’s chocolate.

Some of the other big name artists involved in Hares on the March are Pauline Bewick, Peter Curling, John Doherty, Martin Gale, Graham Knuttel, John Shinnors and Donald Teskey, with a full list of artists published today on www.jackandjill.ie and the charity is urging companies with budgets for Irish art to jump onboard. Hares on the March builds on the success of the charity’s previous Cow Parade, Big Egg Hunt and Pig Parade, with the hare art pieces designed by artists nationwide with the full list on www.jackandjill.ie The title sponsor for this campaign is Lily O’Brien’s Chocolates