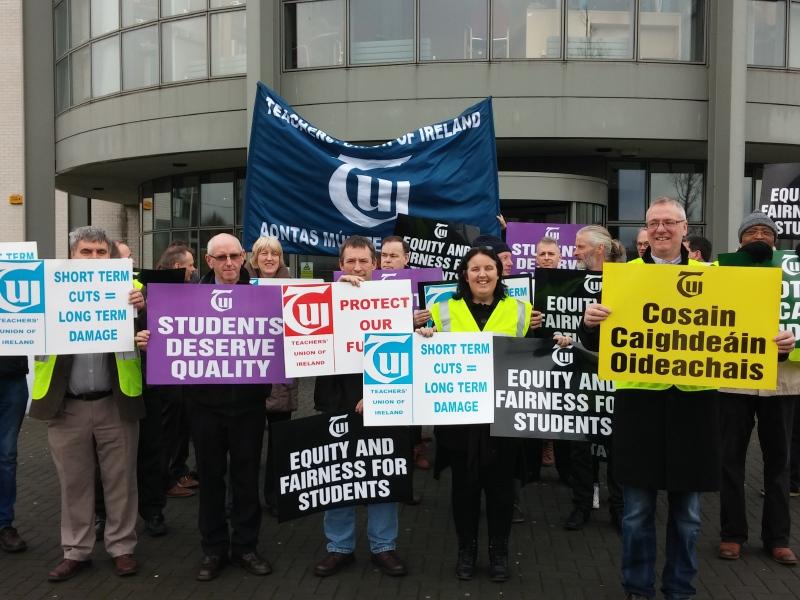 DkIT's academic staff will begin strike action on Wednesday February 3rd as part of a nationwide campaign to oppose underfunding of the Institute of Technology sector.

DkIT has suffered a 36 per cent cut in funding since 2007 while student numbers have risen by over 30 per cent during the same period. Recruitment restrictions have also seen workloads intensify while staffing levels have dropped by 10 per cent.

A delegation from the DkIT branch of the Teachers' Union of Ireland recently visited Dáil Eireann to highlight the extreme difficulties they experience in maintaining a quality education service without adequate resources and appealed to local politicians to oppose further cuts to the Institute's funding. In addition to a shortage of classroom resources students now experience larger class sizes, less access to laboratories and libraries and sharp cuts to tutorials and other student supports.

However this week DkIT's Governing Body voted to accept a Department of Education/Higher Education Authority plan which will proceed with further cutbacks. The HEA proposal include plans to lay off temporary staff while further increasing class sizes.

DkIT TUI vice chairperson Kenneth Sloane stated that 'these proposals are unworkable, would further damage the quality of education provided by DkIT and have been rightly opposed by staff representatives and DkIT Students' Union. The TUI will be fighting to reverse these measures as it is absolutely absurd to believe that the damaging effects of austerity can be alleviated by more austerity. DkIT has provided generations of students in the North East with access to a high quality and affordable education service. Our members want to fight to maintain that services' availability to the people of the region, and we are not prepared to oversee its decline to satisfy austerity policies.'

In December members of the Teachers' Union of Ireland nationally voted by a margin of 92 per cent in favour of industrial action to address the underfunding crisis within the sector. TUI National President Gerry Quinn has called on the Minister for Education to enter into meaningful talks and stated ‘The Institute of Technology sector has been brutalised by an era of austerity cutbacks and the figures speak for themselves.'