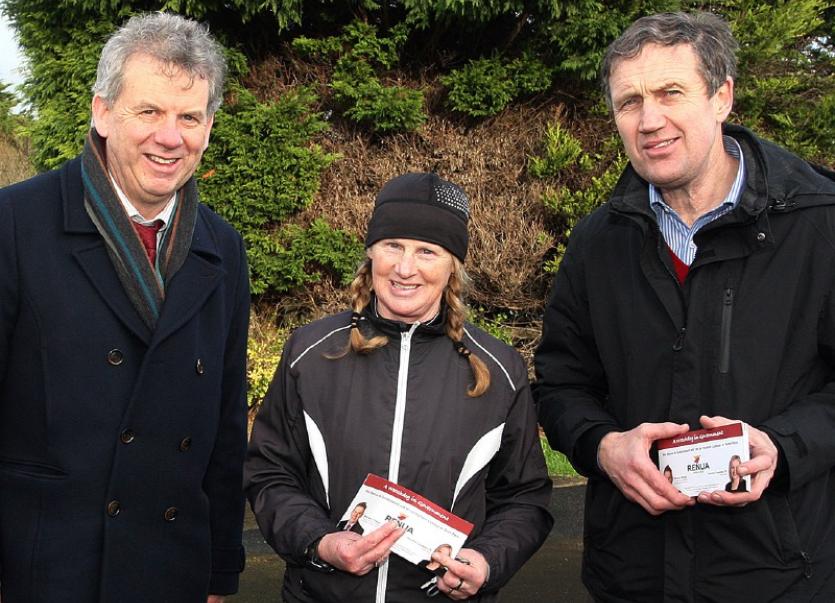 The Renua party presented details of its Louth City of Business pilot scheme at a meeting in Castlebellingham recently.

It was emphasised that the main focus will be on Ardee and Mid-Louth and it will try to replicate the development zones in Scotland and Wales which take job creation from city areas and into the regions. Thomas Clare presented the plans for the Louth City of Business focussing on Ardee and allowing for breakout towards Drogheda and Dundalk and confirmed that it based on a regional development framework. He said Michael O’Dowd, the party’s candidate in Louth, has committed to making the enterprise development zone his main objective for the people of Ardee and Louth .

He has also committed to locating his constituency office at Hale Street in clear and unequivocal terms for the full Dail term and beyond and hopes this will show complete commitment to the middle of the county, long since abandoned by the big town deputies .

“We have been told that “Ardee town may want a TD for Ardee” but people should be clear that for this to happen the age old party ties to FF, FG and Labour parties headquartered in Dundalk and Drogheda need to be pulled asunder,” Mr Clare said.

“Over the past eighteen months we have developed robust job creation policies intended to regionalise new jobs and moving them out from an already overcrowded Dublin city and filtering them down to the regions. We now challenge the other party candidates and members of the voting public to attend policy presentation evenings scheduled for the coming Monday evenings all across the constituency and to collectively develop new and radical policies that will lift all boats in the most effective way possible, namely more jobs and better jobs in the regions.

Meanwhile, Michael O’Dowd has confirmed that he will not be supporting the repeal of the Eighth Amendment of the constitution. Speaking at the launch of the parties manifesto he said that his position n on this has been consistent.

“It is one of the main reasons I joined Renua,” he said. “The eighth amendment protects the life of the mother but it also gives a very important right to the unborn. This right is precious and I am not in favour of removing it.

“As the issue has come up at some doors I think it is important that I put my views on the record.

“But Renua is about more than just the eighth amendment and I will be supporting any policy that helps create jobs. We are also a party that will open up public procurement and remove unfair conditions that hamstring local companies.” and advantage cross border competition.”

At the launch Michael also suggested, tongue in cheek, that he could be considered a Dundalk candidate.

He pointed out that he has worked in Dundalk for over fifteen years and probably knows ‘the town’ as well as any candidate.