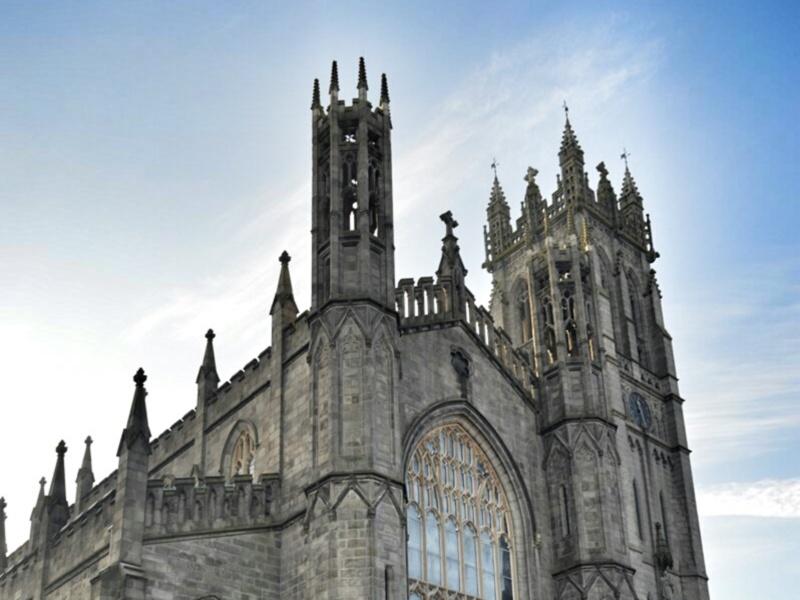 Have you noticed that the clock face on the Hamill Tower of St. Patrick's, facing into Roden Place, appears to be weeping! It has been like that for some considerable time (no pun intended) but I think the tear stain is more noticeable recently because of the inclement weather. This has reminded me of the famous Salvador Dali painting which includes a melting clock face. I wonder is St. Patrick, (or even old John Hamill to whose memory the Town was built), worried about something that is happening, or perhaps not happening, in Dundalk at present?

The explanation for the stain running down from the clock face is simple enough! The reason was related to me by a friend who has worked on the clock mechanism many times. He says that some years ago the clock hands, which have been turning slowly since the tower was erected in 1903, started to loose time. There was nothing wrong with the interior workings but an examination of the clock face showed that the larger, minute hand, was catching on the raised Roman numeral VI (six) when it got to the bottom of its cycle. Whoever did the repairs at the time took off the old numeral and filed down the surface a little. This worked fine but, whatever solder was used to replace the number, it began to be melted away by rain water, causing the dark stain to run down the stonework of the Tower. I have heard of this effect being caused by slightly acidic rain and there are probably other old buildings in Town that are effected by it but nothing quite as dramatic or noticeable as on St. Patrick's Clock!

The sound of the bells

Somehow Dundalk would not be the same without the sound of bells! The St. Patrick's Church bells are an intrinsic part of the Town and I think that each one has a name. I don't know what those names are but I do know that ten chiming bells in the St. Joseph's campanile at St. Alphonsus Road each has a saint's name inscribed on them. Of course, there had to be a St. Joseph and a St. Gerard but I cannot remember what they rest of them are called but there probably is on called Alphonsus.

Originally there were twelve chiming bells, apart from the hour and quarter striking bells, but they were taken down after the fire in the Church in 1920 and were replaced by just ten.

Some people objected to these bells playing hymns at times they wanted to sleep, and this was true also of the St. Patrick's bells, but I believe that the vast majority of the people of Dundalk would be very sad if they were ever to fall silent! Which brings me to the news that that bell tower at St. Joseph's may be in need of repairs which could prove very costly! The bells themselves are still fine but the metal framework is beginning to get very rusty and in need of treatment.

The firm in England that originally cast the bells back in 1896, Taylor's Bell Foundry at Loughborough, Leicestershire, are still in existence. They have recently sent their experts over to Dundalk to examine the bells and framework to see what can be done to preserve them. Those involved with the bell ringing and, of course, the Redemptorist community, are still anxiously waiting to learn what the cost of the work might be. It is surely going to be expensive but I am confident that the people of Dundalk will rise to the occasion to ensure the preservation of these bells as they are the only campanile in the North East and part of Dundalk's heritage.