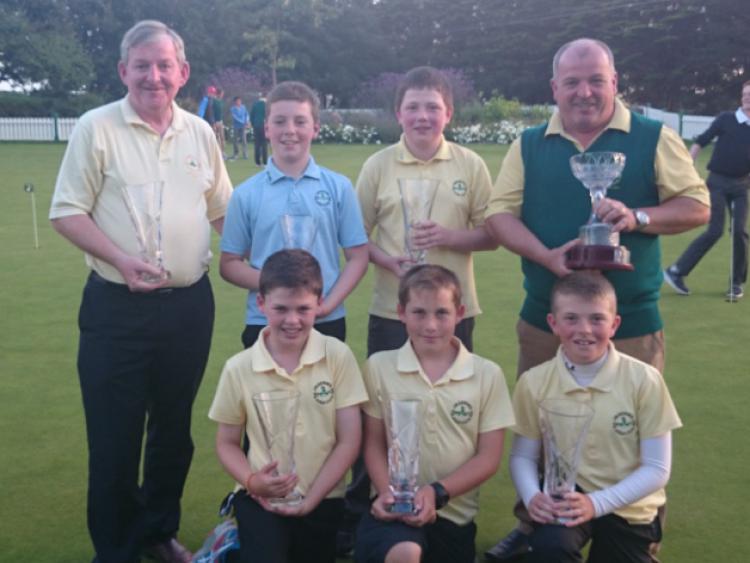 Greenore juveniles travelled to Baltray on Saturday to contest both the U18 Monarch trophy and the U13 McGooey/Cassidy trophy.

Greenore juveniles travelled to Baltray on Saturday to contest both the U18 Monarch trophy and the U13 McGooey/Cassidy trophy.

In the morning matches the U13 team of Kyle Rafferty and Jack McArdle and Mark McGrath and Niall O’Callaghan beat Ardee in the semi final by two holes to set up an afternoon final with the host club.

In the Monarch trophy the team of Ciaran Smyth and Caolan Murphy, Ronan Molloy and Gareth Kilgallon and Cian McGoey and Derek McGrane came from behind to beat tournament favourites Ardee on extra holes to set up a final with  neighbours Dundalk.

In the afternoon final a change was made to the Monarch team with Stephen Finnegan coming in to partner Gareth Kilgallon. Again Greenore got of to a bad start but Dundalk were too strong and didn’t let them back into the match and  went on to win 2-1.

The U13 team had better fortune as they took on hosts Baltray. The match was very finely balanced but started to swing Greenore’s way when the pairing off Kyle Rafferty and Jack McArdle won two holes on the trot courtesy of Jack pitching close on one hole and then pitching in on the next for a two with Baltray on the green.

A superb approach shot to the last by Kyle Rafferty was matched by Baltray. Kyle had a six foot putt to win the match which he duly dispatched for Greenore to capture the McGooey/Cassidy trophy.

The captain, committee and members would like thank Peadar Gallagher and the juvenile committee for their efforts throughout the year and congratulate the boys on their fine victory.

They hope it will inspire the Newsam Cup team to victory this Saturday as they face Ardee in Royal Tara at 2pm. All support would be welcome.