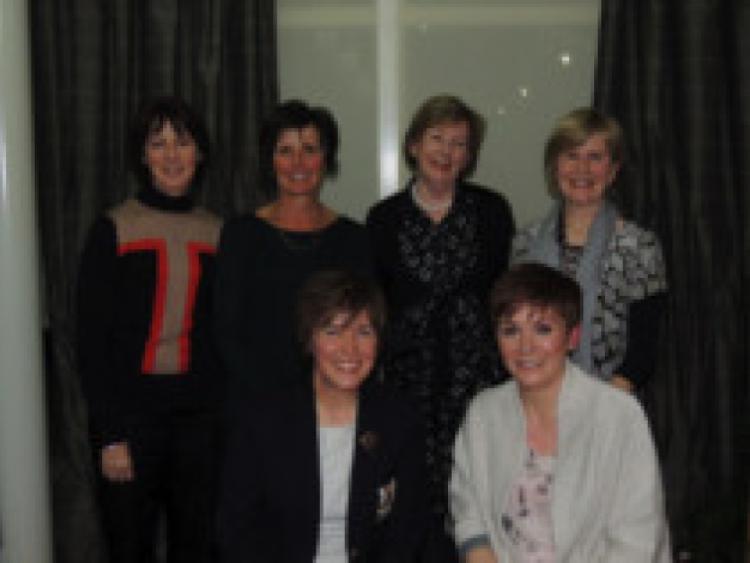 Peadar’s Golf Society held a recent outing to Dundalk Golf Club which was kindly sponsored by Doohan Financial Planning. There was a good turnout in excellent conditions.

Peadar’s Golf Society held a recent outing to Dundalk Golf Club which was kindly sponsored by Doohan Financial Planning. There was a good turnout in excellent conditions.

The next outing takes place on Saturday May 18 at Seapoint GC. Annual Buster money now due.

On May Bank Holiday, Monday May 6, there will be an Open Fourball any combination kindly sponsored by GolfSure. We are available for Clubhouse functions for bookings contact 9373212 ex 3 or Doreen at 0862333384.

The Clarke Cup was played in Greenore last Saturday, April 27. Newcomer Aideen McGahon scored a fantastic 69 to be the clear winner by six shots from Marian Murnaghan who is showing a lot of good form over the last couple of weeks.

Marian shot 75 and reduced her handicap by one shot. However Aideen McGahon’s handicap has tumbled down to 25 in just two weeks competitions. Aideen is certainly the one to watch in the future. Twos were recorded by Jane Savage, Celine Griffin and Kay McCartan.

On Thursday April 25, the Ladies Open Singles was won by Marian Murnaghan with 34pts.

The Junior Foursomes team played the 2nd leg of their match against Hollywood Lakes Golf Club on Sunday last and unfortunately they just lost out by a narrow margin with two matches losing on 19.

Over 100 ladies played in the 18 hole Stableford competition on Saturday April 21 and Tuesday April 23 in support of the 3T’s Charity Event. The 3T’s was set up by Padraig Harrington to help Turn the Tide on Suicide.

The ladies are very fortunate to have New faces sponsor this event each year. Lady Captain Brid Rocks warmly welcomed Sinead Hinney from New Faces who presented the prizes. The lady captain thanked Sinead and New Faces for their generosity and support.

The Open Seniors competition on Wednesday April 24 was won by Patricia Black (11) Headfort 36pts (on back nine from Lesley O’Keeffe).

On Thursday April 25 we had our Spring Lamb Stroke competition which was well supported by the ladies and was played in an afternoon of lovely sunshine following a morning of rain.

The competition was sponsored by one of our regular sponsors Joe Traynor Butchers, Dundalk Shopping Centre who have been sponsoring the competition for many years. We are very grateful to them for their generous sponsorship and continued support of the club.

The first Golfer of the Year counting competition played over the new back three finishing holes needed a countback to separate the winners. Sean Campbell (9) was the early pace setter with 40pts which was difficult to pass until Conor McGivern (17) swooped into the lead with 41.

Second last fourball on the course provided the winner who had a rather inglorious finish to his round and must have thought that he had blown his chance. The ‘new holes’ did Dundalk man Andrew Brodigan no favours as he bogeyed 16, failed to score at 17 and had a double bogey on 18 leaving him with 41pts with the scrambled point up the last his saving grace.

The Gross was won by Colin Pilkington (3) as the front nine went to another Dundalk player, James Coburn, with 22pts which was one less than Colm Traynor had to capture the back nine prize. The best return at the par threes went to Aidan McGarvey who had 18pts.

Next weekend is a fourball better ball ¾ of the handicap and players are asked to arrange their own partner or put name on sheet if seeking a partner. There will be a Singles Stableford sweep on the Bank Holiday Monday, time-sheet in clubhouse. Club Classic four person team events on May 25, 26, 27 with £2000 worth of prizes £80 or €100 per team inc food. GUI and Non –GUI prizes.

The new birthday present from the wife certainly made the difference to Raymond McCumiskey’s golf game as he zipped the new ping irons around the course to produce his best ever round of golf.

Raymond was out in 25 points and home in 22 for a whopping 47pts to take the first Seniors 18 hole competition on Thursday last. Club President Charlie O’Hare was second with 42pts as Eugene Creelman claimed the third podium spot on the countback from Noel Magill after both returned 41pts.

Despite the very wet weather the seniors took to the fairways on Thursday morning and it was a straight battle for the top two places between Frank Ryan and Jim McDonnell with the former taking first place. Next Thursday will see the opening round of the Golfer of the Year with the new holes in play for the first time for the seniors.

Showing improvement with every outing since taking up the game a few months ago, Katie Boyle, has reached the pinnacle of her short career as she eclipsed all of her 25 rivals - boys included - to capture her first ever competition.

For the first time this year the juvenile competition was played over 18 holes and Katie had a winning return of 41pts. Lorcan Rafferty was runner-up on 39pts with Luke Owens back in third place with 32pts.

This weekend the competition will have a 1.30pm start. The juvenile convenors have informed me that because of child safety issues, only fully paid up members are eligible to play or represent the club as and from May 1.

There was a great turnout for the ladies foursomes last week. It was great to see some unusual pairings in the mix. Some of them proved very strong in the end. Well done to the winners!

The Midweek Open this week was won by our past captain, Shane Corr. That performance should surely cement his place on the All Ireland Mixed team this year again. Well done to all winners. Results as follows - 1st: Shane Corr (6) 38pts; 2nd: Francy Clarke (18) 37pts.

This week’s Men’s Stableford competition was played off the blue markers. They can’t be having it easy every week, playing off those white markers. However, there were still some fantastic scores over all. Congratulations to the winners.

There were three ladies teams out in force this week, playing in the 1st round of their Private Homecare Championship matches.

First up was our Challenge Cup team, captained by Nuala Mulholland. They defeated Black Bush in Balbriggan on Monday.

Next up was our Minor Cup team, captained by Jo Morris. Unfortunately, after putting up a good fight, they lost to Black Bush in Headfort on Thursday.

To round up the week, our Junior Cup team, captained by Denise McGuinness, took on Seapoint in Corrstown on Sunday. Again, this was a hard fought match but it just wasn’t to be.

Well done to everyone on each team and best of luck to the Challenge Cup team in the next round.

Our Sam Rutherford team, captained by Jude Garvey, had their 1st outing this year. They played Ashfield away on Thursday. After the first leg, Mannan are only one hole behind. It is really all to play for in Mannan. Well done to everyone involved and the best of luck with the second leg.

Just a reminder to everyone, this May Bank Holiday Monday, May 6, we are having an Open Singles Competition. This is open to all members and visitors, ladies and gents. The timesheet is available on the BRS or simply contact the Pro Shop on 042 9663308 to book a tee time.