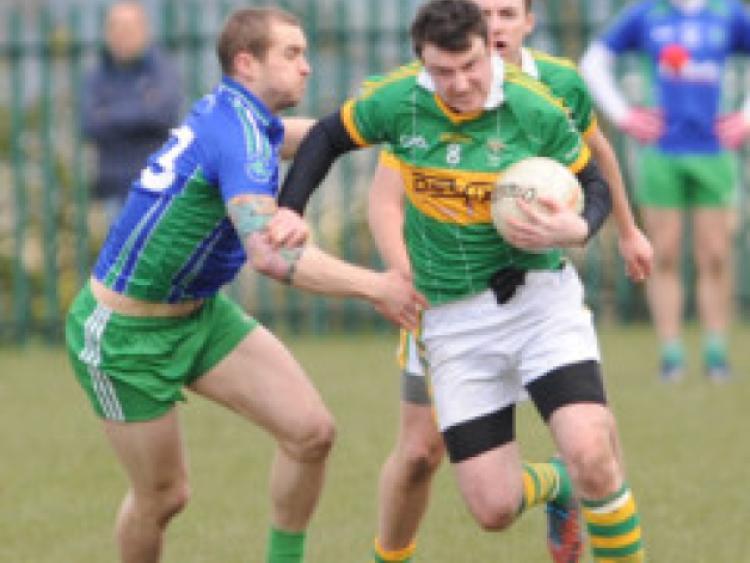 The Emmetts deserved their victory on Sunday in Kilkerley when they held on against an O’Connell’s team that committed footballing suicide by having two men sent off in the space of three minutes in the second half.

The Emmetts deserved their victory on Sunday in Kilkerley when they held on against an O’Connell’s team that committed footballing suicide by having two men sent off in the space of three minutes in the second half.

In what was a low scoring game the sides shared the first two points. The home side then went two ahead both from Raymond Mulholland one a free.

Stuart Reynolds got the Bellingham side back to within one also from a free to leave the home side ahead at the break 0-3 to 0-2.

Sean Hand pointed from a free for the home team just after the break to open the gap to two points and then came the first of the sending offs after 37 minutes when Paul McKeever received a straight red card for what seemed to be descent.

Sean Hand added another point and the home side were three in front.

However the Bellingham side continued to push forward and Niall Conlon pointed from a free.

Then then second sending off, after an attack, a Cian Doyle shot was disputed by both umpires with one saying it was over the bar the other saying the opposite and whatever the player said to the ref, he also received a straight red card.

Robert Quigley scored a great long distance point for O’Connell’s but Hand replied for the Emmetts to keep his side two ahead after 48 minutes.

With only 13 men the O’Connell’s were still in the game and points from frees from Quigley and Reynolds got them level.

But that man Hand popped up again to score his fourth point in a row with only a couple of minutes to go.

Although the O’Connell’s tried to get level again Mulholland landed another free to seal victory for Kilkerley and round off what was a very bad day for the Castlebellingham team.